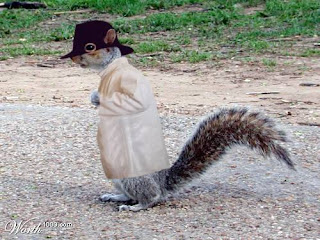 The Daily Telegraph leader got it in one with its headline this morning, complaining that Gordon Brown was "insulting our intelligence" over the EU treaty. Never mind the rather acerbic comment on the on-line edition, which observed:

What intelligence is this? The vast majority of the British population can barely think at the best of times. Getting rid of Labour by voting Tory is like filling a hole in your garden with earth from another hole you've just dug. These people are all the same - self-serving scumbags the lot of them.

We should, however, be thankful for small mercies, and cannot but agree with the sentiment that the leader offers, when it states that, "Gordon Brown seems to be digging himself into a deeper hole over the question of a referendum on the EU treaty. His intransigence now lacks even the virtues of coherence or political integrity."

The leader refers to Gisela Stuart's condemnation of Brown's stance (although the news pages barely report it), and takes us through the inconsistencies in the government's position, thus concluding that, "Mr Brown's position is so lacking in logic and basic honesty that it constitutes an insult to the intelligence of the electorate."

However, it has to be said that much of what has come to pass arises through the inability of those opposing the treaty to get their act together. Not one or the "up front" organisations has satisfactorily addressed the favourite mantra of the government, the "constitutional concept lie", and the transparent evasions on this issue.

Even today, Open Europe is still prattling on about the "red lines", thus ceding the choice of battleground to the government, instead of making a full frontal attack on the treaty itself.

Also high up in the "insulting our intelligence" stakes is Ruth Lea who, as director of Global Vision, launches a debate today in the Telegraph on "How Britain can get the best out of Europe".

Ruth, we have always regarded as "one of us", so we tend to be polite about her on this blog, but her initiative today simply parades her own ignorance and demonstrates how far the Eurosceptic movement has to go before it even begins to understand the enemy it is dealing with.

Writes dear Ruth, "the EEC has been transformed from a customs union 'with ambitions' into a would-be "country called Europe", somehow missing the point that the whole ethos of the "project" was to employ economic integration as a means of achieving political integration. Thus, there has been no "transformation" – the one was always intended to beget the other.

Between deeper integration and leaving the EU, she wants to pursue a "third way" of a "looser relationship" based "on trade and mutually beneficial co-operative agreements", while "opting out of political and economic union". To achieve that, however, she ignores a slight inconsistency of her own – we would first have to leave the EU.

Thus, while the our so-called "movement" skirts round the central issues and hands the game on a plate to the opposition, all the government has to do is keep repeating the mantras. Never mind our "intelligence" – it can simply rely on our incoherence.

So, why the photograph of the squirrel? Well... you wanted another one of Gordon Brown?