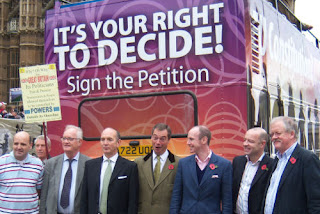 It is something of a truism in the eurosceptic movement that we win arguments (when debating opponents, that is) but cannot put boots on the ground. The reasons for it are manifold and I shall leave it to the members of our forum to grumble away, though I hope all grumblers will explain whether they attended a rally yesterday anywhere in the country and if not, why not. Naturally, this applies only to people actually in the United Kingdom.

The speeches, off the top of a bus with a charmingly old-fashioned megaphone, were uniformly good. The speakers were Bob Spink MP, four MEPs: Niger Farage, Dan Hannan and Roger Helmer as well as Jens-Peter Bonde, who was quite hopeful about the situation in Denmark, Cllr Steve Radford, president of the Liberal Party and Neil Herron of the Metric Martyrs.

Sky TV was there for the entire proceedings but I don’t know whether they used any of the footage. Other media coverage beyond that mentioned by my colleague there is a very positive article in the Sunday Telegraph, though I suspect it was written from press releases sent out assiduously by our press officer, Andy Smith.

PA was there and several media outlets picked up their story though I have not yet located it but have been told of its existence. The AP story appeared in the International Herald Tribune, MSN and MSNBC, the American version. So, it is not precisely true that there was no press coverage at all. I shall update this piece as I find more articles or media references.

have noted several dissatisfied bloggers telling the world how disappointed they were when they got to the rally and implying, I am sorry to say, that somehow they were doing the world a favour by attending the event. One or two anonymous commenters on Prodicus (who, himself, very kindly mentions my name as that of one of the few sensible people there) go even further, lambasting the organizers (knowing nothing about them), the press coverage (clearly knowing nothing about the way the media works) and all attendees, not quite realizing that a blanket condemnation does not make them sound particularly sensible either. 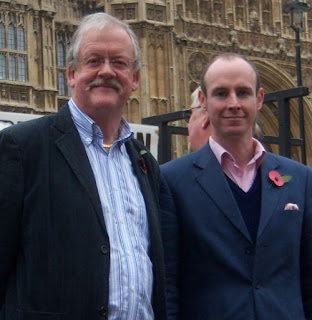 One commenter says that he went around looking for bloggers and found none. To my certain knowledge (and Devil’s Kitchen will support me) there were several present. It’s just that we do not carry notices on our chests that say “Blogger”. How on earth was the anonymous commenter going to find any bloggers?

I am looking forward to Dan Hannan’s blog, which is being written in competition with this one. He will get there before me, is my prediction.

It is true that while several MEPs were present (Gerard Batten was there as well as those who spoke), there were no MPs apart from Bob Spink. Several of them, as I wrote before, have already cast a vote on behalf of their constituents for a referendum but too many refused to do so. It is not their absence that annoys me – after all, they do have constituencies to see to and the occasional other business – but the fact that they would not stick their heads over the parapet even to the extent of casting that symbolic vote.

In all charity, I shall not enumerate the MPs who had been invited to speak and who did not even bother to reply to the invitation. (Though why I should be so charitable, as these people made my life quite difficult I do not know. Must be that famous milk of human kindness.)

BNP members were present as we expected them to be but I do not share other people’s obsession with that party. They are neither the most evil and dangerous organization in this country nor its saviours in my opinion. As long as they behave themselves they can attend meetings and rallies. And they do behave themselves.

There is no question about it, unlike many a main-stream eurosceptic, the BNP members are well disciplined. Whatever they may say in private (none of my business, as it happens), in public they talk sensibly; hand out leaflets that are no more inaccurate than many other eurosceptic ones to anyone who takes them and do not insist on handing them to those who refuse; refrain from screaming abuse; and do not put on fancy dress costume.

Would that other eurosceptics were so sensible. For the record, let me point out that while fancy dress looks charming on children and entertaining on teenagers, it looks embarrassing on middle-aged women and even worse on middle-aged men. A serious political point on the nature of democracy and the shortcomings of our government is undermined by the presence of ladies dressed as Britannia. (And I don’t care who reads this.)

Nor do we get much out of idiotic posters that call Gordon Brown “quisling” (by someone who clearly does not know what the word means) or “Judas”. When I said we win our arguments against our opponents I meant just that. We never manage to persuade our so-called allies that their behaviour puts potential supporters off.

There was a fair amount of loud cheering, booing, shouting (some appropriate some less so) and heckling, though none so loud as Devil’s Kitchen, who yelled across the crowd to somebody who was heckling Bob Spink for being a Conservative (clearly assuming that he was Ted Heath in disguise): “Shut up you tw*t!” It worked.

So what did we achieve? Well, it is worth having a series of rallies (I am waiting to hear about the others across the country) to show that there are people who are willing to come out even in the drizzling rain. It is worth explaining in a way that will be understood across the country and the world what exactly is the problem with this treaty and why the people should be asked whether they accept it. But no, it will not, without additional pressure and a great deal of it, persuade Gordon Brown that if he really wants to be a reforming Prime Minister who believes in power being handed back to the people, whose it was in the first place, he must have that referendum.

That pressure will have to be applied by all of us.

[Most of the pictures published on this posting were taken by the “official” photographer of the Rally, Graham Stewart. The one of Roger Helmer and Dan Hannan is by Simon Richards of the Freedom Association and there are other pictures, by him on the TFA website together with a more detailed account of the speeches.]