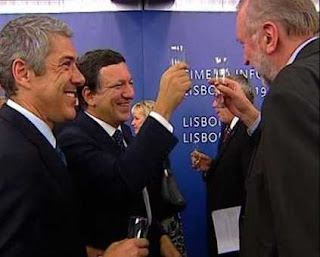 Bruno Waterfield, the Telegraph's Brussels correspondent picks up some revealing details from the celebrations in Lisbon after the "colleagues" had agreed their treaty.

Writes Bruno, "As Europe's leaders toasted the new European Union Treaty with champagne in the early hours of Friday, a camera microphone caught an unguarded conversation between Gordon Brown and José Socrates."

The prime minister, who is without a drink, is hailed by the Portuguese leader - it is 2.10am and, amid much backslapping and self-congratulation, Mr Socrates sees the British leader:

"Well done. You have done brilliantly. We are very proud of you," he says.

Mr Socrates retorts: "It was fantastic, the first council of Gordon Brown."

"So I was not the block on anything?" he asks. "No, no," Mr Socrates assures him.

As the party intensifies, Mr Socrates can he heard jovially discussing Mr Brown's "plans" to get the Treaty past British referendum campaigners.

"You will have big arguments on... (words drowned out). You will take the floor, no problem," the Portuguese leader says amid laughter from both men.

"I will do my best. You have done brilliantly. It is a great success," replies Mr Brown.

Success for whom, Mr Brown?
Posted by Richard at 14:25