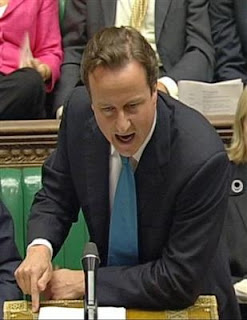 Although much of the media is focusing on Brown's refusal to offer a referendum on the EU treaty, there are straws in the wind which suggest that the Tories are not going to get an easy ride on the issue – unless they get their act together.

One of those "straws" was the leader in The Times today which, under the heading, "Cold Calculations", argued that, "The Tories have a compelling case to make on the EU treaty".

Interestingly, mirroring our view of the proceedings in the House yesterday, the Times referred to the "first day of the faux debate over the EU treaty", noting that it "provided an indication of Gordon Brown’s clear intent to turn a crucial debate over the course of the country into a party political nit-picking session."

"After the alarmingly rapid Lisbon stitch-up at the end of last week," the leader continues, "even the most dedicated objector will wonder if it is worth any further effort pursuing the cause. It appears to be stuck in an awkwardly uncomfortable place somewhere among 'too dull', 'too difficult' and 'too done and dusted'".

But, picking up the vibes which have been evident for some time, the paper suggests that the Conservatives "seem to be doing little more than expressing game opposition and thus risking being successfully steamrollered into resigned submission."

It takes the view that Brown appears to have concluded that Cameron and his cohort "will shy away from full-blooded political confrontation for fear of reopening old wounds within Conservative ranks." It thus enjoins the Party to champion "pan-European free trade", by which means it can show itself to be "true supporters of EU partnership and anything but xenophobic isolationists", concluding:

We could hardly agree with the tenor of this conclusion, but the intimation is definitely there – that the Tories are not fully engaged in the debate – they are skirting round the edges.

And that comes over from a piece on Adam Bolton's clog, where he notes that, during Cameron’s regular press conference this morning, he ran into a little referendum trouble of his own.

There, he was "repeatedly pressed to commit himself to a public vote even if the new treaty is ratified", not least by The Telegraph, only to respond by dismissing such a scenario as "hypothetical". Bolton expands on this in his Sky News report, stating that Cameron "refused to confirm" that he would hold a referendum on a ratified EU Reform Treaty if he were elected prime minister".

All he would commit himself to, in a private word with Bolton, was the phrasing, "If we can hold a referendum at the next election, we will". Bolton emphasises this, noting Cameron's word was "can" not "will".

Several times now, the Conservatives – either via Hague or the Boy himself have been an opportunity to clarify their stance and, each time, they are proving what might be described as "slippery".

This points up a basic inconsistency in the Tory position for, as The Telegraph observed yesterday, if the treaty is as bad as they paint it (notwithstanding that it is actually worse), then they cannot possibly leave it in force in the event that they gain power.

And it is inconsistencies like that which, as Bolton's experience this morning indicates, that the media like to pick on. We could, therefore, see the media focus shift, putting the Tories very much in the frame. If they are to gain any credibility from their oppostion to the treaty, they must sort this out.