It's all so damn predictable 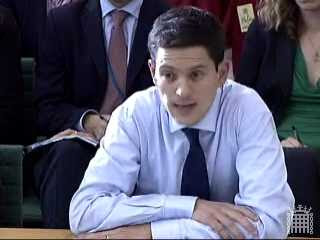 There is a mood in the House of Commons – you can smell it, feel it, even taste it. Party politics, always tribal, has in this new session acquired an unpleasant edge. It is no longer a friendly or even civilised joust between rivals. The two sides – Labour and Conservatives (the Lib-Dims are an irrelevance) - now really loathe, hate and detest each other.

And that was the driving force behind David Miliband's testimony to the European Scrutiny Committee yesterday afternoon where he sought to defend the EU treaty against all comers.

That his arguments simply do not stand up is irrelevant. That the government's stance is inconsistent, doesn't matter. That the committee was not convinced by Miliband’s testimony is neither here nor there. This is now tribal. It is personal. The Tories have set their stall out, demanding a referendum. For that reason, and that reason alone, Brown and his allies will see hell freeze over before they concede one. It is as simple as that.

Brown will go to Lisbon. He may or may not indulge in the expected theatricals – he may not even bother to put up a show. He will come out having agreed the treaty. He will claim that the "red lines" have been protected and that the "opt-outs" have been secured - or vice versa. He will reiterate that a referendum is not necessary. He will go home and declare a victory for Britain.

In truth, he will have very little idea of what, in detail, he is signing. He will agree it because he does not give a stuff what the Tories think and he does not care one whit what they might say. He has the power and the best way he can prove it is by agreeing the treaty.

Meanwhile, his ministers – and especially Miliband – will simply keep repeating the mantras. If they are lying through their teeth – which indeed they are - they don't care. And so the treaty will go through. It is all so damn predictable.