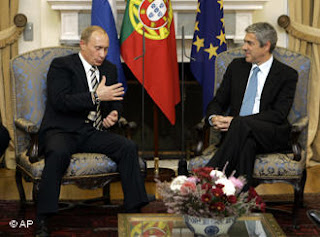 You will search long and hard for any serious discussion in the UK print media today on the EU-Russian "summit" being held in Portugal today, even though the issues being discussed are of fundamental importance not only to Europe as a whole (not just the EU), but to the UK as well.

And, of all the issues that will be discussed, including trade, Iran, Kosovo, the most important can be summed up in one word – energy.

Europe, as one of the most developed blocs in the world, is also uniquely vulnerable, being one of the world's largest importers of oil, gas and coal. And, as the EU commission pointed out in a communication on energy policy issued in January, Europe is becoming increasingly dependent on imported hydrocarbons.

In its analysis, the commission estimated that, with a "business as usual" approach to energy supply, the EU's energy import dependence will jump from 50 percent of total EU energy consumption today, to 65 percent in 2030. Reliance on imports of gas, said the commission, is expected to increase from 57 percent to 84 percent by 2030, with of oil rising from 82 percent to 93 percent.

This is against the background of increasing global demand for oil, which is expected to increase by 41 percent by 2030, putting pressure on global resources. The risk of supply failure, the commission says gloomily, is growing.

And it is into this mix comes Russia. In 2005, the Russian Federation supplied more than 40 percent of EU natural gas imports and more than 30 percent of crude oil imports, making EU member states critically dependent on the continued good will of the Russians and, at the same time, extremely vulnerable.

So it is that The Financial Times reports that, at the summit, the words "tension" and "energy" will once again be heard in the same breath.

But what will not be discussed – openly, at least – is a Russian view that Europe's vulnerability is largely of its own making. Not least is the premature closure of nuclear power stations in the eastern and central European accession states, thus increasing reliance on imported Russian gas for electricity generation. 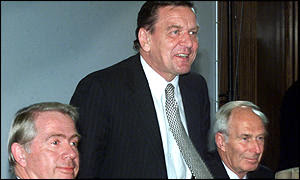 One of the most important factors, however, is the 2000 decision by Gerhart Schröder to close down Germany's nuclear power industry. Done for entirely short-term political reasons – to shore up his own government coalition and to see off the threat of the highly active Green Party – this means that the country's 19 nuclear power stations are being phased out, despite its then 30 percent contribution to Germany's energy supply.

Even now, Angela Merkel is questioning the wisdom of the decision, arguing that the anti-nuclear energy policy is "too narrow and restrictive in an economy heavily reliant on energy imports", one effect of which is to increase the number of coal-burning plants – to the consternation of the environmentalists. German utilities are building or have plans to build 26 coal-burning plants to cope with the shortfall created by the loss of nuclear.

This notwithstanding, the loss of German capacity, with Belgium also joining in the anti-nuclear march, will mean overall a decrease in European capacity of 40 percent by 2030, and that is assuming that the UK replaces all its ageing nuclear plants.

While eyes may, therefore, be focused on the immediate relations between Putin, Russia and the EU, it should never be forgotten that the vulnerability of the European states rests largely on the dominant grip of Green politics. That we may, in the medium to long-term, have our foreign policy choices – and even survival - thus determined could perhaps be called the "wages of Green".