Circuses but no bread 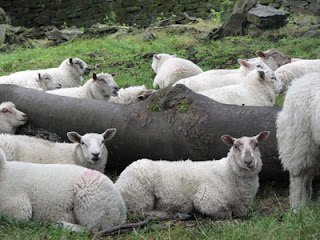 Booker today picks up on the "hidden crisis" affecting Britain's sheep farmers, "thanks entirely to the negligence of our Government and the response of our friends in the EU".

The timing of the escape of foot and mouth virus from Pirbright, he writes, which has led to the EU's export ban, means that the five million lambs we would normally export between now and Christmas are either unsaleable, or can only be sold on the domestic market at giveaway prices.

Many will simply have to be destroyed, without a penny in compensation for a disaster entirely of the Government's making. Some, as Warmwell pointed out, are starving in the fields.

Not least of the farmers' problems is that, thanks to EU rules, it is now illegal to bury this Everest of carcases. Huge quantities of perfectly safe meat, from animals in Scotland, Wales and parts of England much further from any possible exposure to the virus than northern France, will have to be incinerated, at further cost to farmers, who will see most of their year's income go up in smoke.

Putting it all togther, with this latest foot and mouth disaster, bluetongue, the farm payments fiasco (which has cost Britain £400 million in lost EU subsidies), the bovine TB epidemic estimated to cost taxpayers £2 billion by 2014, and much else, there seems no end to the crises our farmers must endure. Most have been caused, or made far worse, by our Government's own limitless incompetence, says Booker, a sentiment with which we would most heartily agree.

But the greater problem is that farming and the need to provide the nation with food could scarcely have been pushed further down this urban Government's agenda.

Nothing symbolised this better than its decision in 2001 - after the astonishing mismanagement of the first foot and mouth crisis, which cost the nation at least £8 billion - to hand responsibility for agriculture and fisheries to the new Department for Environment, Food and Rural Affairs, in which "the environment" takes precedence.

Instead of a Ministry dedicated to food and agricultural issues, we now have almost everything looked after by this absurd department - now run by the vegetarian Hilary Benn - from climate change and waste disposal down to farming and fishing. but Benn is merely the Satrap, working to instructions handed down by the EU.

He and his department have no responsibility for devising measures that might serve Britain's national interests. All that is left to its dispirited staff is to carry out decisions they are handed down and even that - as the farm payments debacle showed - they do extremely badly.

But booker is not optimisitc about the Opposition. When David Cameron wanted Conservative policy ideas, he reminds us, the Boy obediently followed the Labour agenda by chucking in farming and fishing as mere add-ons to the overriding cause of "fighting climate change". He then gave the task of chairing his Quality of Life advisory group to John Gummer, remembered by farmers and fishermen as one of the worst ministers they ever had, and an ardent Europhile quite happy to accept that all key decisions should continue to be made in Brussels. Booker continues:

No doubt to Mr Cameron's delight, the theme of global warming ran right through the 549 pages of Mr Gummer's resulting document, headed "Blueprint for a Green Economy", leaving the concerns of our farmers and fishermen to play a very subordinate part.

It is all very well for Mr Gummer to prattle on for hundreds of pages about the overriding need for a "Low Carbon Revolution", but in the end nothing better illustrates the unreality of this wish to put climate change at the top of the Tory agenda than how it brings two policies into conflict, making a nonsense of both.

Heading the EU's own agenda at the moment is its obsession with biofuels, which it has decided must provide 10 per cent of the fuel we need to drive our transport by 2020. But to grow enough crops to meet our EU target will take more land than we currently use to grow food, and force us into a far greater dependence on imports just when world grain and food prices are rocketing. (The price of wheat, a prime source of biofuel, has doubled since April.)

Mr Gummer is right to bemoan the fact that already we don't grow enough of our own food. But this becomes totally pointless when he endorses an EU policy which will compel us to grow very much less of it.

Our farmers are already paying an impossible price for the way successive governments have pushed farming ever further down their agenda. Before long the contradictions arising from this contempt for agriculture will produce a crisis beside which everything seen so far will pale into insignificance, hitting the front pages of every newspaper in the land.

As we have discovered though, the media too have followed the Labour agenda and have tucked agriculture under the "environment" banner - thereby saving the costs of hiring farming specialists. And in a complex and difficult subject, this means that, at a time of its greatest crisis, farming has never been so badly or incompletely reported.

If the media devoted a fraction of the effort to the subject that it did, say, to the dian inquest, we might all be better off. But then, entertainment is so much more important than food. We can have the circuses, but not the bread.