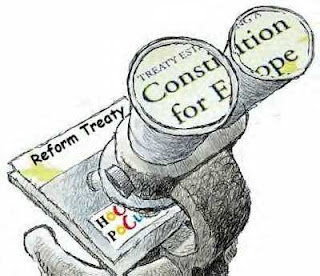 Daniel Hannan does a fairly decent analysis of the state of play on the treaty "quadrille" this morning in Brussels Journal, the oh so predictable and tedious posturing of member states (some of them) as we lead up to the IGC and its equally predictable outcome.

This is the morning when the House of Commons European Scrutiny Committee formally reports on its analysis of the EU draft treaty and solemnly warns that Gordon Brown must block the "objectionable" transfer of power from Westminster to Brussels.

The committee disputes Mr Brown's argument that the treaty is less far-reaching than its predecessor, the constitutional treaty, on which Labour promised a referendum in 2005. The Labour-chaired committee insists that it is "substantially equivalent". This was enough to rate a down-page item in The Telegraph.

Nevertheless, I want a referendum is launching a new series of adverts calling on Gordon Brown to keep his promise to hold a referendum, which are to appear in some editions of The Sun and The Telegraph. They are wasting their money, of course – with a mere 20,189 "supporters" for their petition (as against 20,377 for the entirely unfunded and unlauded No. 10 petition), they are little more than "noises off".

Brown will go to Lisbon and come back with the "deal", the journos will prattle, the BBC will offer a weighty "analysis", telling us what the treaty means, and life will go on as before – on the surface at least - only for battle to resume in Parliament.

If the tone here is downbeat, it simply reflects the reality of a prime minister who, as The Sun so aptly illustrates, is prepared to put two fingers up to the nation, and do whatever he wants.

But, as the headlines of today's papers so clearly illustrate, "Europe" is not high up on the political agenda. Furthermore, with the Eurosceptic "community" fractured and divided, Brown must know that this is not an issue that is going to cause his government much grief.

But, if this treaty does go though, life will not be the same. We will have surrendered that much more power and those of us who know enough and are interested enough in the fate of our country will also know that we have been sold out.

That will add to the well of smouldering resentment and the feeling of betrayal which, at the moment, has no obvious outlet. But there will be more of us who come come to the inevitable and necessary conclusion that government is our enemy. And, when that becomes the predominant ethos – as indeed it will become – what a very different nation we will be.

Pic by the incomparable Anoneumouse.