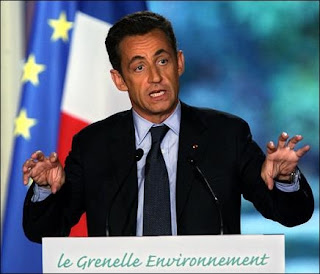 France, we are told by Reuters and others – more particularly president Nicolas Sarkozy – has announced that he is to "suspend" the planting of genetically modified (GMO) pest-resistant crops.

The suspension will remain in force until he receives the results of an appraisal of the issue later this year or early in 2008, to be carried out by a new authority on GMOs that, at the moment, does not even exist. It is to be set up by the French government later this year.

Those with slightly longer memories will know that this represents a significant climbdown by Sarkzoy. Towards the end of September, he was signalling not a "suspension" but a complete ban on GMO crops.

But, if he didn't know then that he no longer had the power to do this - and had to defer to the central government in Brussels – he certainly must have known shortly afterwards. His statement then provoked an immediate protest from the commission, which sternly reminded France that such a ban was prohibited by EU rules. We recorded Barbara Helfferich, spokeswoman for EU environment commissioner Stavros Dimas, saying that, "A general ban is not possible" for an EU state or region.

However, Sarkozy is trapped between a rock and a hard place, the "rock" being the EU commission and the "hard place" being anti-globalisation campaigner José Bové, who – as we reminded readers in our last piece on this subject - still exerts a powerful influence on French politics and is not one Sarkozy will cross willingly.

Unable to satisfy both his masters in Brussels (or even admit they are his masters) and the "anti-globalisationists", Sarkozy is thus resorting to little Gallic games, playing for time by setting up a spurious agency to carry out a spurious analysis.

From past experience (the French played similar games over BSE and British exports), he will wrap himself in the EU flag and push his luck with the commission, but never go quite too far. He may even let the issue go to the ECJ, but will move the goalposts before it rules.

This is playing the "Europe" game, à la française. The French are supremely good at it, and it is something the communautaire Brits have never really understood. They consider it "bad form" or simply "not cricket": "If you are on a losing wicket, old boy," they will mutter, "you should declare and let the other chap have a go".

In the end, though, the French are on a losing wicket but, with a little creative manoeuvring, Sarkozy can drag it out so long that, eventually, it will become his successor's problem. Then, personally, he will have "won" – and that's what the game is all about.