Of woods and trees 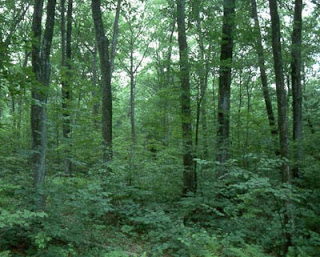 The first is Trevor Royal, diplomatic editor of the archly Europhile Scottish Sunday Herald. He writes a piece telling us that, "for all the fanfares and the sipping of champagne, the new European treaty signed in Lisbon last week is not just about red lines, opt-outs and referendums. The agreement might have created an escape route for the EU's 27 members but - whisper it not - the text is virtually reader-proof."

He then adds that, "documents coming out of Brussels and Strasbourg usually set new standards in gobbledygook but, despite insistences that clarity is now the main objective, the latest offering is pretty dire."

In like vein, we get Matthew d'Ancona in The Sunday Telegraph is telling us that, in the coming days and months, the weapon Brown will deploy in railroading the new treaty through the ratification process,

…will be the sheer, spectacular complexity of this Treaty and the Bill it will spawn: and anyone who doubts its mind-numbing technicality should read the minutes of David Miliband's appearance before the Commons European Scrutiny Committee last Tuesday. Even the angels dancing on the head of a pin were getting bored and going home.

Mr Brown's hope, writes d'Ancona, "is that the duration and tedium of parliamentary ratification will force the media and electorate to lose interest …". He adds:

He (Brown) will ask whether Britain really wants to jeopardise its position in the EU by tinkering with something, by implication, so technical and dull. In politics, the attention deficit of voters and foes alike can often be exploited by a determined PM. "The dogs bark," as William Waldegrave likes to say, "but the caravan moves on."

Sadly, both – from different ends of the political spectrum – are likely to be right. One can look forward to interminable debates in the House about the most minute detail of the treaty, of such complexity and tedium that even this blog will scarce be able to drum up the enthusiasm to report them.

But this need not be and should not be. Shorn of its (intentionally) mind-numbing details, the essence of this treaty is very simple. It is, as Martin Ivens writes in The Sunday Times, "a project to further political union".

Cutting to the chase, therefore, we need to look not so much at the detail but at that which, as we observed, is hidden in plain sight, the themes Booker wrote about in the Wall Street Journal recently.

Simply, we need to hold on to the idea that this is no more a "reform" treaty than any other. It is one of a linked series which takes us that much closer to the ultimate goal of a supreme government of Europe. The primary purpose of this treaty is (and always has been) to further that aim.

The great danger, therefore, is that in looking minutely at the detail of every tree, we lose the fact that, in plain sight, there is a huge "wood" growing up, smothering the political life of the 27 member states of the European Union. It is called, "political union" and, with this treaty – once ratified - will come almost the final stage in that process.