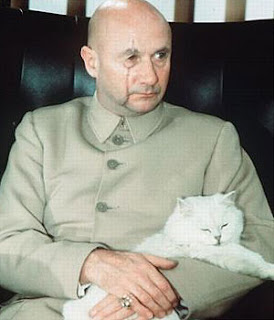 Have you noticed that, all of a sudden, the word "Eurosceptic" is out of vogue? For a while, we were "anti-Europeans" and now, quite suddenly, all the Europhile luvvies are referring to us as "Europhobes".

The explanation for this is quite simple – and it is not a coincidence. Deep within the recesses of the Foreign Office is the single desk, manned (or womanned) round the clock by the "Duty Europhile" – cat on lap – ready at a moment's notice to give the faithful their instructions on every conceivable issue. This is why the Europhiles always come up with the same line on just about everything.

Another example of this remarkable enterprise comes with both Mark Mardell – the BBC’s resident Europhile – and Peter Preston, in The Guardian simultaneously writing carefully crafted pieces on the trauma involved in leaving the EU. Coincidence, this is not.

First Mardell and his clog. He tells us that, "Divorce is not simple", then dwelling on the perils David Cameron would face if, as prime minister, he allowed a post-ratification referendum on the "Lisbon Treaty" (note: no longer a “Reform” treaty – the deception is no longer needed).

This is "very dangerous territory" intones Mardell, adding a few loving touches to spell out quite how dangerous – here lies a European Commission, which would be "incandescent with fury".

Then perish the thought, what if we all said "no"? Well, the options would range from full withdrawal, to some semi-detached relationship with the EU, but the process – any process - would be "painful" and "long-drawn-out". Worse still, those poor ministers who had hoped to turn their backs on Brussels would find themselves spending even more time there, negotiating the changes.

And of course, Mardell then adds – twisting the knife - "as we all know, there can be no institutional change under the Conservatives without a referendum. So ministers would be gearing up for another time-, effort- and money-consuming referendum on a new treaty."

But he hasn’t finished yet. He tells us: "While some (simple fools - unsaid) will say, 'It's simple, just walk away," divorce, separation, or even sleeping in different rooms, is not simple:

Other states might veer from wanting to punish Britain, to being merely stand-offish, but they wouldn't be helpful and would probably adopt a stance that would highlight the difficulties of disentanglement. The whole process would be top of the news half the time and absorb much of the prime minister's attention. And the cry, "What about schools?" "What about hospitals?" would go up.

I think we get the message.

But, just in case we miss it, there is Peter Preston. For him, getting out of the EU "will be bruising not blithe". A mere 741 words follow, ladling on the hardships, as we navigate a "route to the exit", which is "littered with obstacles". "This won't be like breaking your tennis racket and storming off court,” we are told. Instead, we face, "a thoroughly turbulent interim time of indefinite duration."

Actually, we knew this – or at least the saner Eurosceptics knew it, and one of the gross failures of the "movement" has been not to spend the time and effort developing an exit strategy.

But, although Preston lays it on thick, leaving in some ways is easier than he thinks, but in other ways harder. If he complains about having to unscramble all those Directives though, think of all those under-employed MPs who are having to be sent home because they have nothing to do.

For once, we could cheer them on their way, rejoicing as they sent Bill after Bill to the Palace for Royal Assent – all to repeal EU law and replace it with honest, decent British law (or none at all). Whatever the hardship, this surely would be worth it.

But wait – the Duty Europhile probably hasn't finished yet. Stand by for the next article on how difficult it would be to leave the EU, how bruising, turbulent, heartwrenching, dismal, traumatic, er ... Better leave it to the DE.