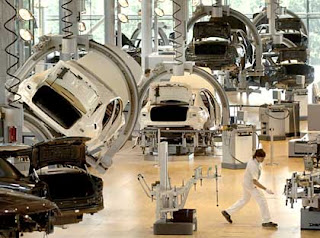 A total of 610 posts on Google News tell the story of the ECJ yesterday overturning what is now being called the "Volkswagen Law" – thus preventing German Länder from holding blocking shares in local businesses, preventing them being taken over.

However, almost all of the reports take a business perspective, with much speculation as to whether the ruling will now allow Porsche AG to take control of Volkswagen, Europe's biggest car maker.

However, when we first picked up this story in July 2004, what came over was how intensely political it was, to the extent that we wrote:

The VW firm is part-owned by the Land (Region) of Lower Saxony, of which Schröder was once president, who also sat on the VW board. And it is this type of financial arrangement – replicated in other Länder with other major firms – which underpins the autonomy of the German regional governments.

The commission, therefore, is challenging the core political structure of Germany, where regional loyalty is much stronger than is any feeling towards the federal government. This is almost a case of the irresistible force meeting the immovable object.

All we get from the current reports, though, is that the ECJ decision is expected to have "wider ramifications" across Europe, where many governments have tried to protect companies they see as vital to their economies from takeovers, particularly foreign ones.

Yet, this ruling does indeed strike at the heart of the economic sovereignty of member states, and for that reason had been hotly contested by the Länder which had been defying the EU commission for years until it lost patience and took Lower Saxony to court on what was clearly a test case.

Coming only days after agreement on the new EU treaty, which further undermines national sovereignty, one would have thought that there would have been a sharp political reaction in Germany towards this display of EU power, over-ruling long-held economic practices at the heart of their regional governments, to say nothing of the implications for other member states.

Maybe that reaction is yet to come but, for the moment – in the light of the muted reports – this looks decidedly like one of those occasions when the dog didn't bark.