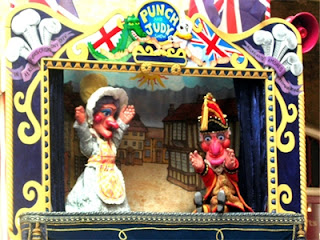 Yesterday, we picked up Fraser Nelson on the Spectator blog, suggesting how Barroso and Brown could stitch up the press, he writing that, "If I were Barroso, I would pick a huge, fake fight with Gordon Brown before the EU constitution, sorry, treaty is signed…".

This was in our own post describing the farce of the pre-IGC posturing, and the transparency of the games being played.

And hey, what do we get in The Observer this morning? We see the headline, "EU slams Brown on terrorism," with the strap, "President rebukes British 'double standards' on treaty opt-outs that 'put Europe at risk'".

This is from Nicholas Watt, the political editor, who writes that the "president of the European Union, Jose Manuel Barroso, has launched an unprecedented attack on Gordon Brown, saying that the Prime Minister is putting the international fight against terrorism at risk."

He then goes on to tell us: "Ahead of the crucial Lisbon summit on the European Union reform treaty this week, Barroso said that Brown's insistence on 'opt-outs' from clauses to create greater co-operation on law and order was setting back the fight against European terror networks."

And so it goes on. But, does anyone other than Nicholas Watt believe that this is real?

Meanwhile, The Sunday Telegraph has informed us – on the basis of recent polling putting the Tories in the lead over Labour – that "the Conservatives may need to be careful how they play the European card."

While two-thirds of those polled want a referendum, outside the ranks of the Tory faithful large sections of the public are not so much concerned about the treaty as befuddled - nearly a quarter admit they do not know how they would vote if a referendum were held.

More importantly, "Europe" remains a potentially divisive issue among Conservatives. Half of Tory voters, we are told, say they would vote to leave the EU while the other half want to stay. Thus, says The Telegraph, Mr Cameron will want to avoid reigniting his own party's divisions on Europe.

But then, if you believe that Barroso and Brown are set for a "biff-bam" row, it is just as easy to believe that Cameron is a Eurosceptic, that he will ignore the Europhiles in his own Party and will go hell for leather for a referendum.

On the other hand, you might prefer to believe that all the posturing from the politicians is about as genuine as the drama enacted in those little tents on the seafronts.