Calm before a storm? 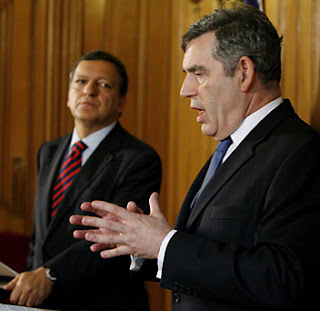 After the hyperventilation of the Telegraph over Barroso's visit to the UK, it is interesting to see the measured calm of the Guardian's report.

Far from the predicted "dust-up", this newspaper had it that Barroso backed Brown over EU treaty by insisting that: "It's not a constitution … I have been a constitution lawyer teaching in Geneva and Washington." He also claimed that he had been delivering the same message since 2005 and was not changing his views while in Britain to appease Mr Brown.

A similar measured emanated from Reuters, which also allowed that Brown had "voiced confidence" that negotiations on the treaty would satisfy British demands. We are allowed to know, though, that the prime minister reserves the right to veto the deal if his "red lines" were not met.

But, in an evident rehearsal for next weekend, Brown also told a news conference after the meeting with Barroso that, "When we look at the detail of the text and study it I believe that we have succeeded in our negotiating objectives."

This morning, however, The Times is doing its best to ramp up some political drama, telling us that Barroso is "frustrated by Gordon Brown's red line in the sand".

This is from Greg Hurst, the political correspondent, who writes that "tensions between Gordon Brown and Europe's top diplomat (diplomat?) were laid bare … as the Prime Minister tried to kill off the case for a referendum on the EU's reform treaty." And this time, Brown is expressing "cautious optimism" that his demands will be met.

However, there is something of the nature of an "unexploded bomb" in the works, in the form of a letter from Michael Connarty MP, the chairman of the House of Commons European Scrutiny Committee.

In the brief time the committee has had to examine the new draft of the treat, Connarty claims they have found changes to key protocols, which were not present in an interim draft – written in French - which they saw on 17 September and since seem to have been inserted in the final text.

Nor indeed, writes Connarty in a letter addressed to David Miliband, were these provisions in the European Council mandate, the effect of which appear to undermine Britain's "opt-in" to EU criminal justice initiatives. The new text contains reference to sanctions if Britain does not elect to opt-in, which include loss of all measures already agreed.

Furthermore, there is a very sharp sting in the tail, which threatens "draconian consequences" if Britain does not accept all the new treaty provisions, which include bearing the "direct financial consequences" incurred as a result of its refusal to opt-in.

"The effect of this provision," concludes Connarty, "would seem to be that the UK would not only lose the benefit of all the EU measures so far adopted (such as the European Arrest Warrant), with the consequent disruption to our systems of criminal justice, but might face the risk of incurring a potentially unlimited financial penalty".

In view of the "compressed timetable" of the negotiations, and "the wider public interest in their progress", Connarty has also elected to make the contents of the letter public.

It may take a little time for the importance of this to sink in but Brown's "red lines in the sand" are looking more shaky than ever. Possibly, the Guardian's calm is merely the precursor to a real storm.