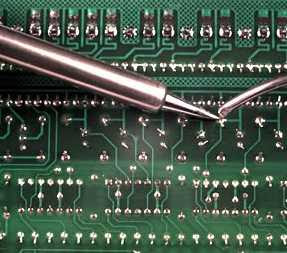 It was in May last year that we wrote, under the title The ultimate in fatuity, of a particularly damaging new EU law, Directive 2002/95/EC on the restriction of the use of certain hazardous substances in electrical and electronic equipment.

Now, it seems, chickens are coming home to roost, recounted in an AP report which tells of ruined missiles, silenced communications satellites and nuclear power plants to forced to shut down. Even pacemakers, consumer gadgets and a critical part of a space shuttle have fallen victim.

The culprits, says AP, are tiny splinters called whiskers, that sprout without warning from tin solder and finishes deep inside electronics. By some estimates, we are told, the resulting short-circuits have levelled as much as $10 billion in damage since they were first noticed in the 1940s.

But, as we discussed back last May, the problems is becoming more widespread, "and the dollar amounts more draining", as the EU fatuous law is set to eliminate the best-known defence against whiskers – lead.

The condemnation comes not from this blog but from Joe Smetana, a principal engineer and tin whisker expert with French telecommunications equipment maker Alcatel-Lucent SA. "The EU's decision was irresponsible and not based on sound science," he says. "We're solving a problem that isn't and creating a bunch of new ones."

AP adds the detail, telling us that, typically measuring under a millimeter long, tin whiskers look like errant strands of static-charged hair, erupting in every direction from tin-based materials like solder. Their cause is hotly debated. Other metals also grow whiskers, but not like tin. The trouble arises when the whiskers bridge separate parts of increasingly miniaturised circuit boards. They also can flake off and interfere with sensitive optics.

And, while scientists debate their cause, they agree on one thing: Small amounts of lead mixed with the tin have been remarkably effective at preventing whisker eruptions for decades.

But this is of no interest to the health and safety zealots in the EU. To prevent lead being incinerated or accumulating in landfill, after electronic devices have been disposed of, it has not so much thrown as hurled the baby out with the bathwater. And despite the very real risks arising from less reliable products (many of them in safety critical applications), EU officials remain obdurate. The new law is needed to protect people, they say.

But, says Jim McElroy, executive director of International Electronics Manufacturing Initiative, or iNEMI, a group of big electronics makers, "Over time (the failures) are just going to get worse and worse and worse." No other materials have shown to be effective in preventing tin whiskers as lead.

When failed appliances start killing people, then perhaps our idiot government will wake up and realise that our government in Brussels is the incubator for the worst kind of stupidity. And as for giving it more powers? The morons that infest the place are not even safe to let out on their own, much less be entrusted with making our laws.