How long can we continue calling them liars? 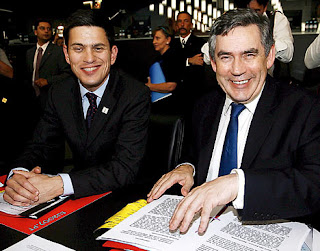 Martin Ivens writes in The Sunday Times that when the EU treaty was called a constitution, the government said it was a harmless tidying-up exercise to help with the enlargement of the European Union. Then it negotiated changes and said all clauses dangerous to Britain had been removed.

"Make your mind up, chaps," he suggests.

Then he observes that an enlarged European Union has not been reduced to paralysis without this treaty. Even if it is sensible to reorder some elements of its voting and modify the rotation of the presidency to cope with new members, he adds, this does not mean that a charter of fundamental rights and majority voting on energy and justice should piggy-back on it.

Our tax and benefit systems are not safe from Europe as is claimed; our freedom in foreign policy will be curtailed. The abolition of further national vetoes is unnecessary. This is a project to further political union.

And there we have it in the last sentence. As with the Coal and Steel Treaty, the Treaty of Rome, the Single European Act, the Maastricht Treaty, the Amsterdam Treaty, the Nice Treaty and now the Lisbon Treaty. One and all, without exception, they are "a project to further political union".

We don't want it, we never voted for it, the political classes deny it is happening and yet … we've got it. What the hell went wrong?

Well, as so often, Christopher Booker gets closest to making any sense of it.

It was apt, he writes, that Gordon Brown's agreement to the EU treaty should have coincided with the announcement that MPs are to get an additional two weeks' holiday a year because there is so little for them to do. The Lisbon Treaty, after all, is another giant step towards a new form of government, empowered to decide most of the laws that govern our lives, making our Westminster MPs even more redundant than they are now.

It was equally appropriate, he adds, that Mr Brown and his puppet foreign minister, David Miliband, should have agreed this treaty on the basis of the most shameless political lie one can recall: that the new treaty is completely different from the rejected EU constitution – with which it is 96 per cent identical.

Three years ago, when Richard North and I were writing a history of the European Union, trawling hundreds of books and thousands of documents, nothing struck us more than how consistently this grandiose project has been built on deceit as to its true nature (hence our title, The Great Deception).

It is more than 60 years since one of its progenitors, Altiero Spinelli, wrote that its aim should be stealthily to assemble the components of a supranational government and only to declare its true purpose at the end of the process by unveiling a "constitution".

It is more than 50 years since another founder, Paul-Henri Spaak, advised Jean Monnet, who was above all "the Father of Europe", that the only way to achieve their goal – a politically integrated Europe – was to pretend that it was only a "Common Market".

It is more than 40 years since Harold Macmillan and Edward Heath went along with this, deciding to withhold from the British people that the real aim was a European state – a deceit perpetrated by Heath in spades when he took us into the Common Market in the 1970s.

Of all our prime ministers since, the only one who did not go along with this concealment was Mrs Thatcher. In the last years of her premiership, she woke up to the dangers of this stealthy, relentless drive towards full political integration – and her determination to fight it played a crucial part in the way she was brought down.

In this respect, the decision of Europe's political leaders in 2001 that the building of the European state should culminate in drafting a "Constitution for Europe" was entirely in keeping with the strategies proposed by Monnet and Spinelli decades before, marking the moment when the "project" could at last come out in its true colours.

When, to their horror, it was rejected, their solution was simply to bulldoze it through regardless of popular wishes, as recent months have shown.

Mr Brown's deceit over this treaty is in some ways no worse than that practised by Macmillan and Heath before him. But he has pulled off a brilliant tactical victory by focusing discussion on those "red lines" (so aptly described by Gisela Stuart MP as "red herrings"), thus diverting attention from the treaty's real significance as a further huge step towards creating a European state.

Of all the immense changes this will make in how we are governed, none is arguably more important, or has received less attention, than the formal creation of the European Council as the cabinet of our new government. The prime ministers who make it up are placed under a wholly new obligation to put their loyalty to "the Union" above that to their own countries.

With this treaty we shall finally be ruled by a government that cannot be dismissed, making Britain, in effect, a small part of a giant one-party state. This may make Mr Brown feel important, as part of "the Big Show", but it is hardly surprising that he does not dare consult the wishes of his countrymen on what he has done.

The scale of this deceit is so colossal that one can scarcely believe they have got away with it. Yet, so far they have. And if it is any indication, watching the "blogosphere" on Google alert, in the wake of the IGC, there is less blogging than normal on this issue, even for a Saturday.

You would have expected the blogs to have exploded with comment – even despite the rugby match - but it is almost as if the majority have been stunned into silence, or are wondering what to make of it.

But what do you do when your politicians tell you bare-faced, brazen lies and, against all the evidence, keep repeating then and repeating them and repeating them? How long can we continue calling them liars, before we ourselves get sick of the sound of our own voices?