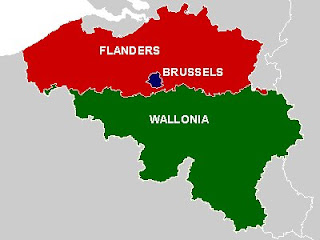 Everyone seems to have forgotten about the Belgian constitutional crisis, even though it might make the signing of that treaty in December a little difficult. If no government, then who will sign? And Belgium has not had a government for 120 days. Could we possibly achieve that state of affairs?

Of course, this has not affected domestic matters as the separate regional government run their own affairs and have done for several years. The question, I suppose, is how will Wallonia manage without government jobs and hand-outs?

Dan Bilefsky of the International Herald Tribune sees light on the horizon, though he may not consider it to be that. Actually, one does have to wonder about the political acumen of a journalist who starts his article thus:

This 177-year-old nation came a step closer Tuesday to averting breakup after its squabbling linguistic communities managed to agree on the one issue that increasingly unites them: fear of immigrants.

By and large one would question the idea that Belgium is a nation. The people who question it most are the citizens of that country, known colloquially as Belgians. Nor am I terribly impressed by the fact that those who make up this “nation” are described as “squabbling linguistic communities”. Mr Bilefsky might like to think less about his own superiority and find out more about the country he is writing about, even if it is only Belgium. He might like to know that Flanders is Flemish-speaking, not Dutch-speaking. They are close but not the same. (No, he is not American but one of ours.)

What is this political idea that has united the squabbling politicos? Apparently, they all agree on the need for tougher immigration rules, though, we suspect that the reasons might be different for the Flamands and the Walloons.

Despite this agreement, political analysts stressed that the crisis was far from over with the important issue of how to grant more autonomy to Flanders and Wallonia still hanging in the balance. They underlined, however, that the deal illustrated how immigration had become a unifying issue in a country where the prime minister-in-waiting recently publicly fumbled the words of the national anthem and where the unifying force for Belgians of all linguistic stripes is a love of the country's 400 kinds of beer.

"A toughening stance on immigration has overtaken politics in Belgium and made immigration a swing issue, and we are seeing this across Europe," said Pierre Blaise, secretary general of Crisp, a sociopolitical research organization in Brussels. "It is not that Belgians are intolerant in general,
but rather that the radicalization of the right has pushed mainstream parties to adopt a tougher approach when it comes to immigration and attitudes toward Islam in particular."

That last statement raises some interesting points about problems that Belgium has faced recently (see our repeated postings about the banned demonstration in Brussels on 9/11) but we would argue that it is not the radicalization of the right but the popularity of their ideas that “pushed mainstream parties to adopt a tougher approach”. Could the socialist mayor of Brussels have overplayed his hand?

Under the agreement, migrants from outside the European Union will be able to come to fill jobs only if there are not enough EU candidates. The parties agreed to stricter rules for immigrants who want to join family members in Belgium, including proof that they have sufficient income. The accord also would reserve Belgian citizenship to those who have spent five years uninterrupted in the country and who speak one of Belgium's three official languages - French, Dutch or German.

This agreement, though it seems to raise Mr Bilefsky’s hackles, does not sound all that tough. It is, as he points out, in line with a number of other countries, specifically Switzerland, which, not being part of the EU, can pass its own laws on all matters.

An increasingly strident stance toward immigration has been seen across Europe, where a get-tough approach to immigrants has been winning votes. In Switzerland, where voters go to the polls in national elections on Oct. 21, the Swiss People's Party, the most powerful party in Parliament, has in recent days been distributing posters showing three white sheep standing in the Swiss flag, as one of them kicks a single black sheep away. The implicit message: Foreigners are not welcome in one of the world's oldest democracies.

It is worth noting that in Switzerland it is not a fringe right-wing party that is advocating the tough stance but a main-stream one that is “the most powerful party in Parliament”, though the Swiss Parliament is less powerful than many others because of the country being a confederacy.

It is, of course, possible that even politicians have realized that their voters are tired of the sort of clever-dick argument that Mr Bilefsky is indulging in. Being the world’s oldest democracy has nothing to do with welcoming foreigners, particularly those that do not accept the rules of that oldest democracy. I think we may assume that Swiss People’s Party has no particular objections to the large international business community of Zürich or Geneva or to the various British shooting clubs that now have to practice in Switzerland because of our own insane gun laws (that have been so spectacularly successful in curbing gun crime).

The other possibility is that the Swiss do not take kindly to the UN interfering in their election and their political parties. After all, they are the oldest democracy and the UN cannot be said to be a democracy of any kind. And perhaps, just perhaps, they are not happy about the violence that has been developing in their peaceful society on both sides of the divide.
Posted by Helen at 20:17