Does he speak with forked tongue? 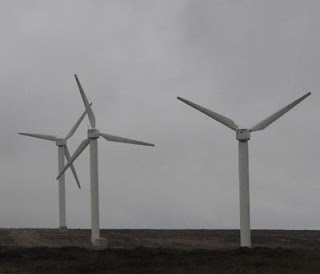 This is again on the basis of "leaked documents" which, we are told, detail a strategy for a "climate change U-turn", arguing that the target is expensive and faces "severe practical difficulties". Instead, Brown is to be advised that Britain should work with Poland and other governments sceptical about climate change to "help persuade" Merkel and others to set lower renewable targets, before binding commitments are framed by the EU commission in December.

However, there is also an admission that allowing member states to fall short of their renewable targets will be "very hard to negotiate ... and will be very controversial". "The commission, some member states and the European parliament will not want the target to be diluted, though others may be allies for a change," says a copy of the report leaked to The Guardian.

Green campaigners have been quick off the mark to condemn the government, with John Sauven, director of Greenpeace, declaring that, "Gordon Brown is now in danger of surrendering any claim to international leadership on climate change and would rather support nuclear power and scupper the European renewable energy target."

In a separate piece, Sauven is even more forthright, accusing Brown of wanting "to work in an unholy alliance with the nuclear-obsessed French and climate-change denying Polish presidents to do to this agreement what Bush tried to do to Kyoto."

"Labour's market ideology for stopping climate change," he adds, "has brought the UK to the point of actively undermining EU efforts to cut emissions and support renewables, while UK CO2 emissions rise."

Leonie Greene, spokeswoman for the Renewable Energy Association, is equally scathing. "There's an exceptionally defeatist attitude on renewables in the UK," she says, citing EU data that shows Britain obtained 1.8 percent of all its energy, including heat, transport and electricity, from renewable sources in 2005, versus an EU-27 average of 6.7 percent.

How very interesting it is that Gordon Brown is the man who wants to ratify the new EU treaty quickly, so that the EU can tackling pressing issues such as climate change. Yet, the first time he steps up to the plate, he is now likely to be opposing one of the EU key initiatives in that area. Does he speak with forked tongue?