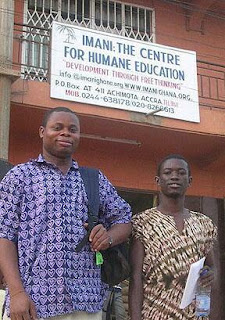 This is not about the European Union but another Continent that keeps pronouncing those "lofty ideals", usually encouraged by the europhiliacs, who would like to point to somewhere, anywhere that imitates the EU in its lunacy.

When it comes to Africa the situation is much worse, as most countries are in dire economic and political straits. I thought our readers would like to see this article that was published in July but has only come to my notice. It is by Franklin Cudjoe, director of a Ghanaian think-tank Imani and one of the bright young economists and political analysts in various African countries that would like to see them weaned away from destructive aid policies and onto policies that would allow economic growth.

If Gordon Brown really does want to put help for Africa at the top of his list or priorities (I seem to recall Tony Blair saying something similar at various times during his premiership) he could do a lot worse than consult Franklin.

Anyway, the article appeared in the Kenya Business Daily soon after the last African Union Summit during which those ideals of political unity were much in evidence:

We heard much at the AU last week of lofty ideals of unity, not least from Libyan dictator Muammar Ghaddafi, but nothing of any use on the real disasters of Zimbabwe, Darfur, Somalia, Ethiopia and Eritrea. Other failures such as corruption and election-rigging did not even feature on the agenda--although these remain the real unifying features of Africa.

Above all, there was not a whisper about property rights, the rule of law and market freedoms that would allow Africans to emulate the growth of Asian countries such as
Thailand, Malaysia and South Korea--which were as poor as we were at independence in the 1960s. Even the growth records of South Africa, Mauritius and Botswana are ignored as being somehow exceptional instead of being acknowledged as the direct result of sound economic policies.

That just about sums it up. Another version of the piece can be read on Imani's own website.
Posted by Helen at 17:28