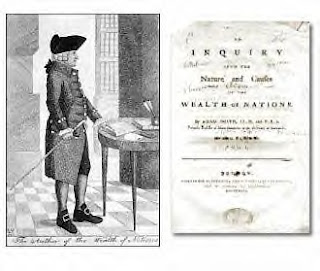 Somewhat belatedly I got round to reading Eamonn Butler’s IEA pamphlet, "Adam Smith – A Primer". I cannot recommend it too highly both to people who have always meant to find out more about Adam Smith but never quite got round to it and to those who have read the great man but would like a little brush-up.

While I would not like to take away the pleasure of reading this work from anyone, I cannot help quoting Dr Butler’s summary of the main ideas in "The Wealth of Nations" and the harmful ideas that great work was trying to defeat:

The most obvious theme is that regulations on commerce are ill-founded and counterproductive. The prevailing view at the time was the ‘mercantilist’ idea that a nation’s wealth was the amount of money that it possessed. This implied that to become richer, a nation needed to sell as much as possible to others, in order to get as much coin as possible in return; and it needed to buy as little as possible from others, in order to prevent its cash reserves leaking abroad. This view of trade led to the creation of a vast network of import tariffs, export subsidies, taxes and preferences for domestic industries, all designed to limit imports and promote exports.

Smith’s revolutionary view was that wealth is not about how much gold and silver sits in a nation’s vaults. The real measure of a nation’s wealth is the stream of goods and services that it creates. He had invented the idea, so common and fundamental in economics today, of gross domestic product. And the way to maximise that product, he argued, was not to restrict the nation’s productive capacity, but to set it free.

Another central theme is that this productive capacity rests on the division of labour and the accumulation of capital that makes it possible. Huge effi ciencies can be won by breaking production down into many small tasks, each undertaken by specialist hands. This leaves producers with a surplus that they can exchange with others, or use to invest in new and even more efficient labour saving machinery.

Smith's third theme is that a country's future income depends upon this capital accumulation. The more that is invested in better productive processes, the more wealth will be created in the future. But if people are going to build up their capital, they must be confident that it will be secure from theft. The countries that prosper are those that grow their capital, manage it well and protect it.

A fourth theme is that this system is automatic. Where things are scarce, people are prepared to pay more for them: there is more profit in supplying them, so producers invest more capital in order to produce more. Where there is a glut, prices and profits are low and producers switch their capital and enterprise elsewhere. Industry thus remains focused on the nation's most important needs, without the need for central direction.

But the system is automatic only when there is free trade and competition. When governments grant subsidies or monopolies to favoured producers, or shelter them behind tariff walls, they can charge higher prices. The poor suffer most from this, facing higher costs for the necessities that they rely on.

A further theme of "The Wealth of Nations" is how different stages of economic progress produce different government institutions. The early hunter-gatherers had little of any value. But when people became farmers, their land, crops and livestock were important property and they developed government and justice systems to protect it.

In the age of commerce, as people accumulate capital, property becomes even more significant. But this age is populated by merchants who have much to gain from distorting markets in their favour and who have the guile to use the political process to help them. Competition and free exchange are under threat from the monopolies, tax preferences, controls and other privileges that producers are able to extract from the government authorities.

For all these reasons, Smith believes that government must be limited. It has core functions such as maintaining defence, keeping order, building infrastructure and promoting education. It should keep the market economy open and free, and not act in ways that distort it.

It is so very sad to think that all the problems that Adam Smith outlined as being barriers to growth and economic prosperity are still considered to be sensible policies by the European Union, by our own political establishment and by far too many people who know no better but think they mean well.

Email ThisBlogThis!Share to TwitterShare to FacebookShare to Pinterest
Labels: economics