A new world of freedom 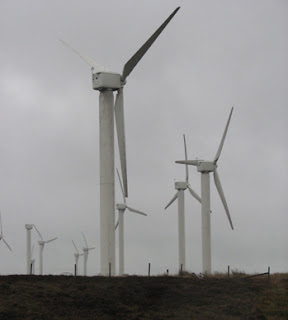 "We're living in a new world of freedom, where people have more power and control over their own lives," writes David Cameron.

In a week when the award panel of the Nobel Peace Prize finally demonstrated the moral bankruptcy of their award, by giving the prize jointly to snake-oil salesman al Gore and the IPPC, Booker – in the same newspaper as Cameron, gives a graphic example of our brave "new world of freedom".

A Government inspector, he writes, gave the go-ahead last month to 10 giant wind turbines at Bradwell-on-Sea in Essex, famous for its 7th-century Anglo-Saxon chapel, the oldest in Britain:

Each 400ft turbine will be as high as Salisbury Cathedral, visible for miles. The scheme was opposed by almost everyone in the area, including Maldon council, whose head of planning, James Doe, said: "Once built, the windfarm will change the historic landscape of the area for years to come, with historic landmarks such as St Peter's Chapel irreparably harmed."

Despite Mr Cameron's little world where people "expect to make more and more decisions for themselves," the inspector, Philip Major, claimed on the other hand that, although there would be "a major change" to the area's appearance, its "essential character" would not be lost, and that the "elegant" turbines would not harm the setting of St Peter's.

Thus the majority of those who will actually have to live in the turbines' shadow - and expected “to make more and more decisions for themselves” - thought one way, while a single individual who may never visit Bradwell again thought the opposite. Naturally his view prevailed.

All over Britain, Booker tells us, scores of similar battles are taking place, as the Government desperately fights to meet its EU-imposed target that, by three years' time, 10 percent of our energy must come from renewable sources. At the moment that figure is less than 5 percent (only 1 percent from wind). The only way the Government can see to meet its target is by forcing through permission for as many as 8,000 more turbines.

However, Booker has also picked up an interesting little gem. Little noticed, he adds, was a recent recommendation from Ofgem, which regulates gas and electricity industries, that the Government should end its Renewables Obligation, under which the wind industry receives a hidden subsidy of nearly £1 billion a year (eventually due to rise to a staggering £32 billion a year), paid by all of us through higher electricity bills. This compels the electricity companies to buy all the power generated from wind at around twice the normal market price.

Without a subsidy, as the British Wind Energy Association pointed out, the industry would become so "uneconomic" that investment would dry up.

One reason this drama does not receive more national attention is that it is being chiefly fought out through local battles, which attract only local coverage.

Just occasionally a campaign hits the headlines, such as that over Glyndebourne opera house's plan to build a single, comparatively small turbine next to the Sussex Downs. But this is insignificant beside other proposals, such as the 130 turbines, each 450ft high and requiring 30 miles of new roads, that threaten to destroy many square miles of ancient peat bog at Strathspey.

In Devon residents are fighting 22 vast turbines planned around Knowstone. In west Cumbria they are opposing 21 giants planned to dwarf six villages. In Dumfriesshire they are shocked by the prospect of the 71 monsters recently approved by the Scottish Executive near Moffat.

In the past year or two, however, a significant change has come over the nature of these battles. No longer are communities objecting to wind turbines just because they represent colossal intrusions into some of our wilder, more beautiful landscapes.

The penny is dropping that subsidised windpower is an expensive way to generate only pitifully small amounts of electricity, and that the CO2 emissions it saves are derisory (when it was recently boasted that the hundreds of turbines in Wales save 200,000 tons of CO2 a year, an expert pointed out that a single coal-fired power station in Glamorgan emits this amount every week).

So locked is our Government into the vain dream of meeting its EU target that it is prepared to bend normal planning rules and flout local democracy in every direction, to force through as many schemes as it can. But people are at last waking up to the fact that windpower has become one of the most lucrative confidence tricks of our age.

When even Ofgem calls for an end to the subsidy system as "the most costly and inefficient form of lowering CO2 emissions" yet devised, the days of the "great wind scam" may at last be numbered.

Quite what Jonathon Porritt will make of that, Heaven only knows, but he is already attacking Gordon Brown for making "soaring" speeches, but failing to match his words with deeds.

Then there is the EU lining up to have a go, accusing Britain accused of "scuppering EU's renewable energy plan". This is the EU legislation to enforce a binding target of using renewable power to produce 20 percent of Europe's energy by 2020, an "ambitious target", agreed by Tony Blair last spring. But it is also one which Brown's civil servants have told him is unachievable.

But, with a new treaty in the offing, which will include a commission competence to deal with climate change, Mr Bown's "new world of freedom" may also be crashing in on him.

Funny thing that freedom … what it seems it boil down to is the freedom in many different way, to do as we are told. But then, when like Cameron, you aim to do the telling, I guess that really does look like freedom.