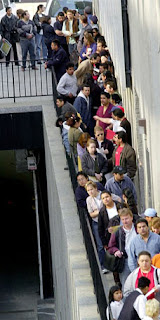 At last the penny is beginning to drop … at least in The Sunday Times. In a leader headed, "Right not to remain silent", the paper writes on immigration, observing that, "polls show that people are deeply concerned about its impact and frustrated that a policy fundamentally changing the nature of Britain is occurring with little or no debate."

It goes on to say that many feel that the governing classes have either lied about the scale of immigration or else buried their heads in the sand, adding that, "more people would like a say, sensing that the influx now is greater and more rapid than anything experienced in the past."

As we get further into the piece, we see the statement that, "One of the crasser phrases came from Gordon Brown when he advocated 'British jobs for British workers'", to which the comment is added, "something that is simply illegal" – without specifying under which law (i.e., EU law).

You have to wade through nearly to the end to get that information, where you will find: "One of the unspoken truths, of course, is that there is little that the government can do to control immigration. As a member of the European Union, many of these people can come and go as they please."

But that is as good as it gets. Instead of drawing the obvious conclusion, the paper then wiffles that this (membership of the European Union) should require the government to do two things: "articulate a vision of Britain under which all newcomers can unite and express loyalty; and start a debate about how we will manage this influx and absorb it."