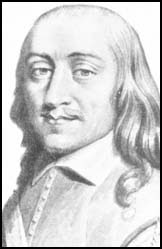 How particularly apt it was for Philip Johnston in The Telegraph this morning to cite Thomas Rainsborough MP:

Johnston's piece, headed, "Beware, constitutions can change your life," goes right to the heart of the matter, stating boldly, "The controversy over whether the EU treaty is really a constitution by another name misses the point. This is not an argument about Europe's constitution; it is about ours." He then goes on to argue that:

…the transfer of power and sovereignty over the past 40 years has transformed what Walter Bagehot called the "great entity" of the British constitution, characterised over hundreds of years by its continuity and simplicity. It is often said that we have no written constitution. We do. It is contained in dozens of statutes but has never been codified into a single document.

This is a subject whose importance is too easily ignored. It seems as dry as dust, arcana of interest only to political anoraks or academics. Yet it goes to the heart of who we are as a nation. It defines our liberties and the relationship between people and the state, the governed and the government.

The man is dead right and, in agreeing to subsume the very heart of our constitution to the European Union, Brown has torn asunder the basic fabric of that constitution. Already damaged by the Treaty of Rome and successive treaties, with this current treaty, it is no more.

And that, dear readers, brings us to the "poorest he". This treaty has been agreed by a government with no mandate, no permission, no authority, no consent, transferring the powers of our government to an alien entity in Brussels. Thus, to paraphrase Rainsborough, "we hath not had a voice to put ourselves under".

That being the case, we "are not bound in a strict sense" to this government. It is not our government. It acts without our consent. To it we owe no loyalty, no obligations and no duties, only those which it can extort from us by dint of the brutal force which underwrites the power of the State. But that which we give is not given willingly, or at all, other than under the threat of force.

That Brown has no right to do what he is doing is summed up in a short letter from Booker, in the same edition of The Telegraph, who declares that which forms the very basis of our relationship with the state, that "we entrust our liberties to our MPs and expect them in return to do what they promised to do when we elected them". Booker continues:

In fact, the one right our MPs have not got is to give away those "liberties" we entrust to them. For three centuries, it has been central to our constitution (under the Declaration of Right) that power ultimately belongs to the British people. It is only entrusted to MPs for the duration of a Parliament.

Under the law of the land, MPs are not entitled to give away powers that do not belong to them.

And so we move to Roger Bootle, who tells us that "[the] EU treaty threatens economic freedom", this commentator telling us to:

… forget the idea that this treaty is minor and forget the protection afforded by the so-called "red lines". That protection may well not survive the first onslaught in the European courts. What matters is the political will across Europe to forge a European state. As many a European politician has been honest enough to admit, this treaty bears a striking resemblance to the recently abandoned Constitution and as such represents another major step along the road to surrendering national sovereignty altogether. If that result were to emerge, quite apart from the political implications, it would have major economic consequences.

...the danger is that, bit by bit, the considerable economic freedoms we in the UK still enjoy – to regulate the labour market, set taxes and set interest rates – would be eroded and we, along with the rest of the EU, would be governed by a single economic policy.

Bootle thus sum up the essence of the treaty process. The agreement of the document is only the first stage – the pain comes later, as the enemy (aka "colleagues") begin to use the powers so carelessly given to them.

That, in fact, is the worst of it, because one cannot even be sure that Brown and his acolytes even know what they are doing, or have any real idea what they are surrendering. One has this vague idea that our leaders are possessed with some greater knowledge, but this hardly seems to be the case.

There is no better evidence of this than the commentary, again in The Telegraph that Brown's high-profile pledge to find an "extra 500,000 British jobs for British workers", given at the Labour Party conference, is likely to be illegal under European law.

So obviously and transparently is this in breach of EU law (as enshrined in the 1957 Treaty of Rome text) that I do not think we even blogged it at the time – perhaps we should have, although I think we took it as the usual, meaningless rhetoric that one hears at Party conferences.

But, as the House of Commons library (rightly) points out, that European law stipulates that workers from EU member countries must "enjoy equal treatment" when applying for jobs. "Both direct and indirect discrimination against migrant workers from the EU is prohibited," says the library report.

However, time and again we see our rulers (and wannabe rulers – remember Howard on immigration?) who come up with statements of intent, which clearly breach the law of our central government in Brussels, to which they have signed up. It really does make you wonder whether they know what they are doing.

That aside, there is clearly a growing constituency of informed commentators who do understand what the government is doing, and who do appreciate the implications of this new treaty. In that, there is some hope. The intellectual arguments are not going Brown’s way, and there is more than usual unease about his course of action.

That unease must, in due course, be translated into action – not least by the Conservatives, some of whom do realise what is at stake. This current situation is not tenable and, whether the bulk of our population know it or not, we are fighting for the very survival of our nation.