The enemy in Brussels 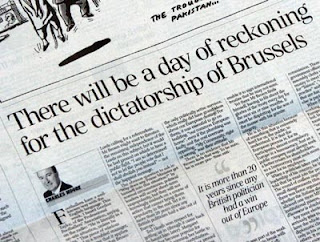 "The EU is not such a sharp oppression as was Soviet Communism, but it is similar in this respect - it tries wherever possible to avoid the democratic judgement of the people it rules. When that judgement does come, therefore, it will be merciless."

So writes not a swivel-eyed Eurosceptic "loon", but a respected member of the English establishment, former editor of The Daily Telegraph, none other than Charles Moore.

He is writing in the op-ed of his former newspaper, under the banner, "Brussels dictatorship will face day of reckoning," commenting on how it comes to pass that a prime minister, who probably does not agree with the treaty he has just approved, goes with the flow and accepts it anyway.

Addressing the question which so many of us have considered and discussed endlessly, Moore writes:

"Why does any Prime Minister get himself into this situation?" In normal circumstances, political leaders will accept short-term unpopularity, but they will not knowingly embark on a course of action that cannot bring them popularity in the end. Yet it is more than 20 years since any British politician had a win out of Europe.

He then posits that Brown is in this situation because of something that is extremely hard for us, the public, to understand:

It is that the European process is, for its participants, almost compulsory. Europe is a bureaucracy. Just as a public company must always seek a better return for shareholders, so a bureaucracy must seek more power for its employees.

When a politician takes over the leadership of his country, he is told that he must join the process. The round of endless negotiation, small disagreements (this time there was fierce argument about whether the Italians should be allowed one more MEP), new institutional powers, treaty, vin d'honneur is absolutely set.

Any mere elected person who seriously tries to disturb it will have the whole official and diplomatic class against him, not only in his own country, but in 26 others. It requires someone of quite exceptional courage and tenacity to try to resist this - and even she failed. Mr Brown will not bother.

Moore may have a point here. Within the "bubble", it is very hard for a politician to see things clearly and, under the pressure of modern politics, it is also very hard to get the time to think. He will be sucked into whirlpool and dragged down by it, simply because it is a powerful, elemental force and there is no countervailing force to keep him from it.

But, if Brown is in his own "bubble", so indeed are the majority of MPs in their own – as indeed is the claque of political journalists which feed off them. And while Moore writes of things which are extremely hard for us, the public, to understand, one of the most formidable of those is the depth of pure ignorance that handicaps most MPs.

Because they have managed to get themselves selected and elected does not mean that MPs know anything of EU politics and the process of political integration. By and large, they do not and, the further up the ladder they go, the less likely they are to understand anything. Thus, you are dealing with a group of men and women who are profoundly ignorant of the events that are occurring around them.

Against this background, we see a change in strategy in The Telegraph which, in its own leader, announces a shift in the focus of its campaign. In addition to asking its readers to petition directly for a referendum, it is now enjoining them to write to their MPs, asking that they keep their promises made at the last election, to give us a referendum.

Well-founded, obvious and well-intentioned, this strategy is also bound to fail. As much as the paper may make some good points (and some bad), those MPs who can be bothered to engage in the issue (not many), might easily content themselves with the leader in The Guardian, which offers a contrary view. 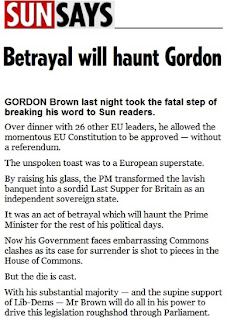 It writes of Gordon Brown coming under "venomous attack" for accepting the new European treaty, criticising The Sun for painting him as attending "a sordid last supper for Britain as an independent sovereign state". This is "hysterical language", says The Guardian, even from a newspaper with a history of exaggerating the implications of European Union membership.

In rejecting the calls for a referendum, the leader goes on to note that:

The strange thing is that such calls for a popular vote come from groups that also claim to be the greatest defenders of Westminster's sovereignty. This makes no sense. One might think that supporters of the supremacy of the House of Commons would be keen for it to take the final decision on the matter, as constitutional precedent shows it should. So why are they looking for another route? The reason is obvious. Westminster contains a majority of MPs who will back the new treaty - just as they backed entry to Europe in 1973, the Single European Act and then Maastricht later on.

This unhappy reality leaves opponents of the treaty promising to save parliament from the consequences of its own folly by ignoring its view. But if its members are so unwise and unrepresentative of their country on this important matter, should they be trusted to take decisions on any other?

Is it right that a parliament that cannot be relied upon to examine a treaty adjusting the operation of an international organisation of which Britain has long been a member should take the final decision on momentous issues such as war, or major domestic questions, such as identity cards? There is certainly much wrong with the way parliament works and the way that it is elected. That is why it needs reform. A referendum, which will diminish representative democracy, is no way to achieve it.

Where, of course, this paper goes utterly wrong is in defining Parliamentary sovereignty as unfettered license. For sure, Parliament is sovereign in its own House, (once) having absolute mastery of its own rules and procedures. But the ultimate sovereignty belongs to the people. The Guardian would have it that Parliament is free to give away something which is not its to give. It has no license or mandate so to do.

However, such niceties will not trouble the MPs who do not wish to hear the calls of the people (those few who care enough to follow the Telegraph's injunction). But, most of all – as we observed earlier - this is now a tribal issue. The Conservatives have made it so. Thus, whatever reservations any rank and file Labour MPs have, with but a few (very few) brave exceptions, they will rally to the colours when the whips come calling.

The pity is that, although it is rightly theirs, few people are really aware of what is at stake. I venture that is you go out into the streets today and stop 100 people and ask them what "great event" happened over the last two days, not one in those hundred will be able to tell you. For the MPs – and the "colleagues" – therefore, stealing their sovereignty is as easy as taking candy from a baby.

That notwithstanding, people eventually do notice. In many ways, they already have … that it really does not matter who you elect, the outcome is always the same – and that means you usually get shafted. At the moment we tolerate it, but this will not always be so.

Moore thus, in writing about "merciless" judgement, is doing nothing more than articulating the lessons of history – that when people are disfranchised and can no longer affect the way they are governed, eventually, they will rebel.

First, though, has to come the realisation that our government – of which Mr Brown is a member - is no longer in Westminster, but Brussels and that, behind the smiling faces and soothing words, it is our enemy. Then, if history is any guide, we will have to kill them.