There will always be jobs for the boys 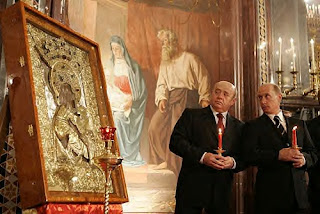 Those of us who were worried about the future of the former Russian Prime Minister Mikhail Fradkov (rumoured to be all members of his family) need do so no longer.

He has been appointed to head the foreign intelligence service (SVR) in succession to Sergei Lebedev, who will be heading the Executive Committee of the Commonwealth of Independent States (CIS).

According to Alexander Kolesnikov of Kommersant (one of whose journalists recently “committed suicide” in rather odd circumstances) the idea of placing Lebedev into his new position was Putin’s very own, though he obviously managed to have private discussions with other leaders of the CIS and get them to agree. [link in Russian]

One wonders, naturally enough, what sort of gifts (Kolesnikov’s suggestion) or other methods the Russian President used to place his own close associate at the head of the CIS. Not that it matters. Russia’s relations with the various countries are unlikely to change in the near future.