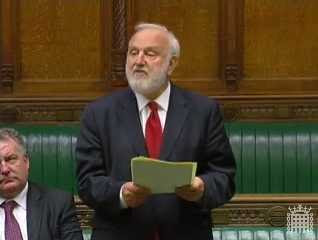 Congratulations to Frank Dobson MP, for taking up the case of Joseph Mendy, a black Englishman who fell foul of the Spanish police and the European Arrest Warrant.

Dobson raised the issue yesterday in a House of Commons adjournment debate, and what a sorry tale it was. There is no way of telling this story briefly, so it is well worthwhile reading the debate in full (link above). Nevertheless, these are the highlights.

Mendy’s nightmare started in November 2003 when, then aged 19, he went on holiday with two friends to Fuerteventura in the Canary islands. On the second Friday of his stay, he was sitting by the hotel swimming pool when a number of Spanish police officers appeared and insisted that he accompany them to the hotel room that he was sharing with his friends.

The police searched Joe Mendy, his two friends and their hotel room. They were taken to a police station, where they were charged with counterfeiting four €50 notes, one of which the police claimed had been passed in a bar and another in a shop. One note was in the possession of one of Joe Mendy's friends, and the other was found among other notes in a drawer in the hotel room.

Mendy and his two friends appeared in court on the following Monday and again the next day, when they were released and Mendy was allowed to return to England, having been told he would be contacted by the authorities.

In an attempt to cut a long story short – and thereby losing much of the detail – not until 28 March this year was Mendy served with a European arrest warrant. He was held in police cells in Liverpool overnight and brought to London in a police vehicle for a court appearance the next day. Despite an appeal, on 18 July, he was handed over to the Spanish police at Heathrow, who accompanied him to Madrid.

At the subsequent court appearance in Madrid, Joe Mendy was denied bail on the bizarre grounds that he was a flight risk. By this time, the Spanish judicial holidays were commencing, he was held in the Spanish jail over the summer. After spending almost two months on remand in the Spanish jail, he appeared before a Spanish judge on 15 September. His Spanish lawyer advised him that if he continued to plead not guilty, he was likely to be held in jail for at least a further year before his case came to trial. If, however, he pleaded guilty, he would, because of his exemplary record in Britain, get a suspended sentence and a small fine.

Understandably in such dreadful circumstances, he pleaded guilty and got a two-year suspended sentence and a €600 fine, despite the fact that he was never in possession of any forged euro notes and had no idea that any notes were forgeries. Joe Mendy was released and is now back in the United Kingdom.

Dobson also established that the Spanish authorities had originally sent their communications to Mendy to the hotel in Fuerteventura instead of his home address in England and issued their warrant on 14 June 2004, with an English-language version received by the UK central authority on 25 June 2004.

After the warrant was eventually served, the judge in Britain responded by deciding that a British citizen of exemplary character should be returned to Spain in July, despite it being known that the Spanish judicial holidays were coming up - meaning that Joe would probably have to stay in jail—and without recommending to her Spanish counterpart that Joe Mendy be granted bail in Spain.

That was followed by a Spanish judge deciding that Joe Mendy was a flight risk, despite his never having displayed any such tendencies at any stage. That, in turn, was followed by Joe Mendy being pressured into pleading guilty by the prospect of a further period of a year on remand in a Spanish jail.

All that, said Dobson:

…was over four 50 euro notes, none of which were found in his possession; all that was done under powers that this House granted to deal with serious organised crime that crosses international boundaries. I repeat: serious organised crime … but did anyone seriously believe that it was intended to cover accusations relating to the innocent possession of four forged €50 notes?

Sadly, the law that we passed does not require the authorities to use their common sense or to have a sense of proportion. Having being passed by the House on the argument that it would speed up extradition, our law does not demand that the authorities proceed expeditiously. Instead, it demonstrably permits them to take nearly four years to crank up this draconian machinery. Have not the Spanish police and judiciary anything better to do? Was this the best use of Britain's Serious Organised Crime Agency? What happened was not a crime, was not serious, and most certainly was not organised. 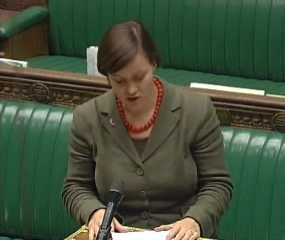 The response, as is the way of things, came from Parliamentary under-secretary of state for the Home Department, by name of Meg Hillier (who she?). Also in the way of things, she cries off, claiming that she “cannot go into great detail about a specific case,” and then delivers several yards of extruded verbal material about the issuing of a European arrest warrant.

The one memorable thing she says – almost priceless in its banality – is this little gem:

We have to have faith in our European partners, and there are safeguards in place to ensure that each European country has a proper legal and judicial process to take such decisions.