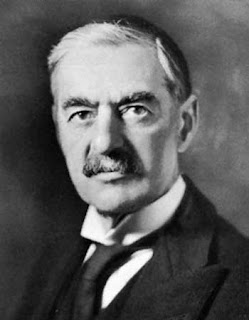 … if journalists wrote about what they knew? Well, all right, I can hear the objection to that. If they did that, the newspapers and magazines would be very thin, indeed.

Today’s example is Andrew Gimson of the Daily Telegraph. Writing about Gordon Brown’s admittedly rather stupid comments about not letting the people of Czechoslovakia (no longer in existence) down by not “supporting” the Constitutional Reform Lisbon Treaty, Mr Gimson immediately reaches for the Chamberlain comparison, as, apparently some MPs did.

Frankly, I am sick of having Neville Chamberlain paraded as the ultimate in treacherous wickedness. What did the man do? He was, in domestic matters, rather a good politician but without, perhaps, the imagination required to deal with the likes of Chancellor Hitler or French Prime Minister Daladier.

However, he was not, unlike Stalin, really taken in by Hitler, as witnessed by the fact that rearmament was started under him, with some difficulty because of the constant opposition from the Labour Party and the trade unions, something that everyone forgot during the infamous “guilty men” electoral campaign of 1945.

In 1938, as Chamberlain knew, Britain was not ready for war (it is questionable how ready she was in 1940 but, at least, the time gained had been spent on rearmament and improvements, especially in the RAF). The Empire and Dominions would not support Britain as the leaders made it clear to the Prime Minister. It was not just the Establishment that was against the war, as Mr Gimson so foolishly asserts, but most of the population.

Precisely why was Chamberlain supposed to risk British lives in the services and in the cities, as it was believed by all that London and other cities would be rubble within days of a declaration of war, for a country that was far away and of which people did know little? Come to think of it, how much does Mr Gimson know about Eastern Europe now?

As it happens, even President Beneš did not think the country was worth fighting for as he never gave the order for the military to resist the German invasion of Sudetenland. Czechoslovakia was not that small a country, as it happens.

Its army was the third largest in Europe, after the French and the German ones. The mobilization of September 1938 produced an army of just half a million fewer than the German one, mobilized in August of that year. There was a well-developed military base.

Imagine how different the history of the twentieth century might have been if the military and political leadership of Czechoslovakia had made a different decision in September 1938.

The curious thing about Chamberlain and the Munich Agreement is that it is always presented as the ultimate in wickedness. The far worse Yalta Agreement of 1944 is usually regarded as a perfectly sensible decision arrived at by sensible politicians.

Subsequent demands that we give in to Soviet demands or, more recently, Russian ones or refuse to fight Islamists are not seen as anything particularly bad. Better Red than Dead appeared to be a sensible slogan, though, in fact, it was hardly that, since experience showed that being Red meant being Dead for a large part of the population.

I have lost track of the number of times I have heard comparisons between British Prime Ministers signing various treaties that are clearly against this country’s interests and Neville Chamberlain, who was doing his best to protect this country and to prevent it from having to fight a war it was likely to lose.

Gordon Brown is not like Neville Chamberlain. That is an insult to a good politician and a man who, in his own way, helped to make that final victory possible, even if he did not live long enough to see it.

Before anybody gets too excited, this is not decry Churchill, who was well aware of the need to get his own version of what happened in the thirties into print before anybody else did. He was a great war leader, possibly the greatest this country ever had, in a long history of war leaders. But let’s face it, he was a rotten politician.
Posted by Helen at 20:13