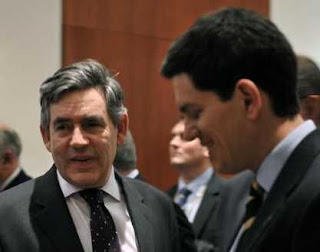 The report is by James Kirkup, who has travelled to Brussels to cover the "big" story, blathering away that, "The price of the most environmentally-friendly fridges, washing machines and dishwashers would fall under a plan to cut VAT being advanced by Gordon Brown."

Brown can "plan" all he likes, but I prefer our version – little Gordie, clutching onto Milibland, going cap in hand to Brussels to ask the "colleagues" if they would mind awfully having a chat about reducing VAT.

The Times gets the point, telling us that our provincial governor "met with a cool response". One EU diplomat explained: "The whole idea of VAT is difficult because you cannot tell if it will really influence prices. If it is opened up, a whole set of other concerns over VAT rates will be raised such as whether Britain should keep its zero rating on children's clothes and newspapers." 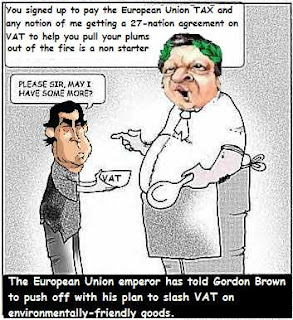 Patting little Gordie on the head, the EU commission promised to humour him and look into the "proposal". But a source told The Times: "The aim is good but the tool is probably not the most efficient way of doing it." That leaves "Downing Street" to say that "it would continue to push the idea", which means for the moment it has been deep sixed.

Much more important than massaging Brown's ego, the substantive part of the Times's story, headed, "EU signals retreat over green pledges", tells of EU leaders "clashing" over how to cut greenhouse gases "a year after making climate change their top priority with a series of tough targets."

This is a reversion to real life which we recorded earlier. The Times however, has only just noticed, reporting: "The first signs of a retreat from the much-trumpeted green pledges came from Angela Merkel … who called for concessions for German car-makers and heavy industry."

Nevertheless, now the British MSM (or part of it) has finally caught up, we are told that the "sound of brakes" being applied to the EU's climate change plans led José Manuel Barroso to warn the 27 leaders that their credibility was on the line.

For some of us, of course, that motley lot never has any credibility, but we must let Barroso have his little illusions if it keeps him happy. He is not going to get anything else, at least, anything out of Merkel.

Heading a fragile coalition, she cannot afford to rub her backer up the wrong way and is determined to protect German industry from losing competitiveness "in the rush to go green." "I will be standing up particularly for jobs in Germany's car sector," she says.

We are going to see a lot, lot more of this. As the recession bites, the member states are finding that they simply cannot afford to sacrifice their economies on the altar of EU vainglory. As for Brown, they at least have had the pleasure in doing something we have not yet had the opportunity to do – telling him to get lost.