Fifty-seven minutes and one sip of water? 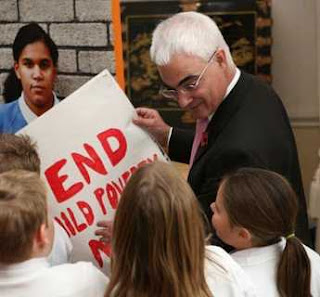 It seems as if "snow" is not the only taboo word in the British media and political bubble. Despite Wednesday's budget looming, the one word you will not find readily is "inflation".

This really is quite an interesting phenomenon as anyone over a certain age will remember that this used to be the main political topic, dominating the headlines between 1975 and 1981.

As disposable incomes fall, the emphasis instead is on taxation, as well it might, although none of the main political parties are as yet suggesting that public spending should be cut – deemed by many to be a necessary precursor to any sustained reduction.

One of the few to broach the subject of inflation over the weekend was Tom Stevenson in The Sunday Telegraph - business section, of course.

His opening line starts , "If you think that the reported inflation rate bears no relation to your day-to-day experience of rising prices …", something that chimes with what we have been writing, although there is very little political comment on what is now very obviously a skewed reporting system.

Stevenson, however – as you would expect from a business correspondent – sees inflation through the prism of business concerns, his particular article covering the "embattled food and drink sector which is grappling with the fastest increases in its cost base for a generation."

Big brewers such as Scottish & Newcastle and Greene King, he tells us, are assuming price rises this year of 25 percent for malted barley, 150 per cent for hops, 50 percent for apples, 20 percent for glass bottles and the same for aluminium cans. Their input costs have already soared in the past three years - wheat by 123 percent since 2004, hops by 294 percent and barley by 182 percent over the same period.

Nor are the brewers not alone. Stevenson tells us, highlighting the difficulties facing the whole food and drink manufacturing business, such as Premier Foods, Unilever, Kraft and even Domino's Pizza.

While economic orthodoxy tells us that the primary driver of inflation is governments printing money, we get in this article Martin Deboo, a food analyst at Investec Securities. He refers to "a perfect storm of input cost inflation", which is a revealing comment. This is inflation driven by the external costs of commodities – not something directly caused by governments - reflecting the scarcity value of essential goods.

One suspects that the reason that UK politicians are so reluctant to talk about this "perfect storm" is that there is very little they feel they can do about it. And for the opposition, there is less political mileage in attacking the government on its inflation record than there is on taxation.

Nevertheless, there are already warnings that inflation is not going to stay in its box, with Stevenson emphasising this. He writes that the impact of rising food prices should not be underestimated. Even a modest increase at the checkout can affect our inflation expectations, something the Bank of England takes very seriously because it feeds so quickly into pay negotiations.

In another article, however, Reuters (via IHT) warns that pressure is mountings on central banks "facing what looks like the third wave of a global credit crisis." But, says this article, soaring inflation is tying the hands of central bankers who want to bolster economies by cutting interest rates.

Faced with what could be an economic meltdown, however, many of the pundits are predicting a thin, no-risk Budget. It may be a sign of the times but Bill Jamieson is suggesting – only half in jest – that the "big issues" in chancellor Alistair Darling's first budget, are the complex questions on which bookmakers William Hill has opened books.

These include, whether he will be wearing a red tie (Labour traditional) or a green one to stress his environmental credentials? (There are odds of 6-4 on red, the same as him imposing a tax on supermarket plastic bags.) Another of such vital issues is: How many sips of water will he take? (Spread betting firm Sporting Index hopes to tempt the punters over the length of Darling's speech and how many sips of water he might take. It is predicting a 57-minute speech and just one sip of water. But taxing mineral water is a 9-2 shot.)

The really horrible thought is that this is something more than harmless fun and represents a flight from a reality that no one knows how to handle.