"… I am really frightened" 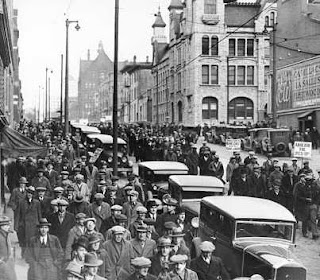 So writes Ambrose Evans-Pritchard in The Daily Telegraph, who offers a chilling prospectus for the immediate future of the economy. Roger Bootle, however - in the same newspaper - seems to live on a different planet.

Comparing the two we start with Ambrose, who argues that the Fed's emergency rate cuts in January have failed to halt the downward spiral towards a full-blown debt deflation. The debt markets are freezing ever deeper, a full eight months into the crunch and contagion is spreading into the safest pockets of the US credit universe, while sub-prime debt is plumbing new depths.

Furthermore, Ambrose believes there is no end in sight because US house prices are in free-fall. The annualised rate of fall was 18 percent in the fourth quarter, and gathering speed. This is not a normal downturn and the Fed rate cuts from 5.25percent to three percent (with more to come) will not end the panic. Leverage is too extreme. Bank capital is too eroded, with UBS saying that the cost of the credit debacle will reach $600bn. New York professor Nouriel Roubin suggests $1trillion. And we have not even begun "wave two": the British, Club Med, East European, and Antipodean house busts.

The nightmare issue though (my words) is that no one seems to be in charge. Writes Ambrose:

As the once unthinkable unfolds, the leaders of global finance dither. The Europeans are frozen in the headlights: trembling before a false inflation; cowed by an atavistic Bundesbank; waiting passively for the Atlantic storm to hit.

Half the eurozone is grinding to a halt. Italy is slipping into recession. Property prices are flat or falling in Ireland, Spain, France, southern Italy and now Germany. French consumer moral is the lowest in 20 years.

The euro fetches $1.52 (from $0.82 in 2000), beyond the pain threshold for aircraft, cars, luxury goods and textiles. The manufacturing base of southern Europe is largely below water. As Le Figaro wrote last week, the survival of monetary union is in doubt. Yet still, the ECB waits; still the German-bloc governors breathe fire about inflation.

The Fed is now singing from a different hymn book, warning of the "possibility of some very unfavourable outcomes". Inflation is not one of them. "There probably will be some bank failures," said Ben Bernanke. He knows perfectly well that the US price spike is a bogus scare, the tail-end of a food and fuel shock.

"I expect inflation to come down. I don't think we're anywhere near the situation in the 1970s," he told Congress.

This is interesting. Ambrose agrees that inflation is not an issue. Real wages are being squeezed, he writes. Oil and "Ags" are acting as a tax. December unemployment jumped at the fastest rate in a quarter century. Thus, he cites Princetown Professor Paul Krugman who says, "The greater risk is slump."

Ultimately the big guns have the means to stop descent into an economic Ice Age. But will they act in time? "We are becoming increasingly concerned that the authorities in the world do not get it," said Bernard Connolly, global strategist at Banque AIG. "The extent of de-leveraging involves a wholesale destruction of credit. The risk is that the 'shadow banking system' completely collapses".

So it is that Ambrose concludes: "For the first time since this Greek tragedy began, I am now really frightened."

Turning to Roger Bootle, he – on the other hand – thinks the eurozone could come to our rescue. Actually, he is more "wondering”"than thinking, speculating that the eurozone could outgrow both the US and the UK and thereby lend us some support by boosting our exports.

His thesis is that the eurozone and US economies could become "decoupled". In that case, the old saw would not apply. Just because the US "catches a cold", this does not mean that Europe catches pneumonia.

To support this thesis, he offers two arguments. The first is that eurozone trade ties with other countries have recently strengthened, particularly with eastern Europe. And that area - including Russia - should continue to grow strongly this year. The second, and more important, reason is the eurozone has not been subject to the financial imbalances which have plagued the Anglo-Saxon economies.

Since, he writes, it is the imbalances and financial excesses which are at the root of what has gone wrong in America and the UK, and what threatens recession there now, it is reasonable to think the comparative absence of this factor in the eurozone argues that slowdown there should be much less serious.

Here, Bootle argues, the exchange rate is going to be critical. Over the past year, the euro has risen by 15 percent against the dollar and by 12 percent against the pound. Moreover, the way the US Fed is prepared to slash interest rates makes it look as though there could be upward pressure on the euro for some while.

This is putting enormous strain on the unity of the eurozone - and on the independence of the ECB. Politicians are getting extremely jumpy, and they want action to bring the euro down.

Equally, the different experience of member countries is causing enormous strain. Italy continues to languish at the bottom of eurozone performers. Its growth this year will probably be only 0.5 percent. Moreover, Spain is cooling fast and its property boom is now turning to bust. This would ordinarily justify big cuts in Spanish interest rates. But Spanish rates, like rates all across the bloc, are set in Frankfurt with a view to the position of the eurozone as a whole.

The German economy is holding up quite well. This is no boom but it looks as though the growth of German consumption, although it will still be pitifully weak, will be stronger this year than last. Meanwhile, in Germany especially, the high inflation rate continues to give cause for concern. So, from a German perspective there is no case for big reductions in interest rates.

All of this puts the ECB in the hot seat. Until recently, it still sounded hawkish about interest rates as it fretted about the inflation outlook. Not surprisingly, given that inflation is already at 3.2 percent.

But, as in other countries, the forward indicators of inflation are much better. And the rising euro will put downward pressure on inflation.

My guess is that as other central banks cut rates and as the euro stays strong, while hope builds that eurozone inflation can fall fast next year, the ECB will cut rates, perhaps by as much as one percent in total. This should prevent the euro exchange rate going through the roof and should give some support to the eurozone economy.

So does Bootle "suspect" that the next couple of years may see the eurozone outgrowing both the US and the UK. This will be no bonanza, he adds, or even a pick-up in growth. All that will be happening is that the eurozone economy slows less severely than others.

With two such contrasting views, it is difficult for the "ordinary Joe" to know what to think. One could retreat into the cliché that, if you laid all the world's economists end-to-end, you still would not reach a conclusion – but that would be too trite.

On balance, we go with Ambrose, not least because he offers dire warnings about the derivative market, which are hideously over-exposed, holding down a staggering turnover of $45 trillion. With such huge sums at risk, Bootle's comforting thought that the eurozone can somehow trade its way out of trouble seems a little unreal.

However, even Ambrose – and his sources – I fear, are under-rating the effect of inflation. This has not "spiked" – there are more price rises in the system and although currently, wages are being driven down, that situation might not last for ever. There are more things going on than we can begin to imagine, and it is a huge struggle trying even to get a glimmer of an understanding of what is going on. But, when experts differ so widely, it seems we are in good company.