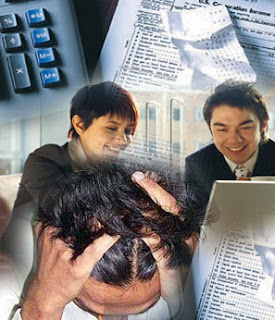 The scandal of the billions draining from the public purse in VAT fraud is matched only by the total inability of the "colleagues" to do something about it. Time and time again, proposals have been made to tighten up the system, only then to founder as the complexities or political disagreements become apparent.

But, all things come to them who wait. At last, the colleagues have found something they can agree on which, the commission claims will "tackle fraud effectively".

So, are they to change the system? Er… no.

The brilliant wheeze they have come up with is to change the "tax period" from three months at present, to one month. This means that traders who previously had to submit their VAT returns four times a year now have to do it twelve times.

And, since the tax becomes due in the tax period that it has been charged – regardless as to whether it has been collected – this means that many traders will suffer additional strain on their cash flows, just at a time when banks are tightening up their lending. Trading terms often extend to one month of more for payment so many traders will have to fund their VAT bills from their own pockets and hope that they then get paid by their customers.

However, according to the commission, member states may extend the tax period to up to a year for buyers or customers making transactions to a value of more than €200 000 per calendar year – which is pretty small beer for the average trader.

Despite this, we are all highly reassured to learn from the commission that, according to the various consultations carried out within the private sector, "these measures will not impose an additional administrative burden on economic operators."

This must be true, because the commission has said so. Quadrupling the amount of paperwork and having to pay tax up to two months earlier could not possibly "impose an additional administrative burden on economic operators."

All this, of course, is so that member states can pick up suspicious transactions earlier and pass information between member states quicker, in order to detect fraudsters. These are, in the nature of things, very small in number compared with the number of legitimate traders so, for want of doing something that is actually effective, the commission is demanding that everyone multiplies their own workloads and pays in money earlier - often before they have even received their own payments.

That, by any measure, is collective punishment.