We don't do "issues" 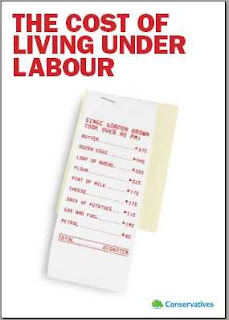 So, Mr Cameron has caught up at last, telling us all that, "people in Britain are suffering price rises far in excess of the official rate of inflation."

His intervention immediately gets a pat on the back from the Spectator blog, which is of course entirely oblivious to the fact that we were asking why the Boy was so silent on the issue on 13 February.

Far be it for us to state the obvious – but you read it here first, well over a month ago.

At the time, we hazarded the view that the Cameroons had no great incentive to talk up the issue. Acknowledgement of the true rate of inflation, we said, would simply unleash a torrent of wage claims that would have the economy teetering on the edge, and drive us even deeper into the mire – a mess that Mr Cameron and his boy chancellor would have to sort out.

To that extent, therefore, we claimed there was a conspiracy of silence amongst the political classes, who were happy to make hay on the political margins, but would not address the seriousness of the problems which confront ordinary people.

That Mr Cameron is indeed now raising the issue is to be welcomed. He is only saying what so many of us have been saying for months. But, in the tiresome way of British politicians, this is framed entirely in tribal terms, the focus being on, "Del Brown's addiction to statistical chicanery".

The BBC responds to Cameron’s initiative by quoting Yvette Cooper, Chief Secretary to the Treasury. She tells us: "With increases in world fuel prices and a global credit squeeze, the most important thing for families is economic stability here at home to keep overall inflation and interest rates low and employment high - something the Conservatives still fail to understand."

So, from both sides, we get the "biff-bam" politics that provides heat and no light. On the other side of the Channel, however, French president Sarkozy is also on the case.

But, rather that indulge in the claustrophobic tribalism seen here, he is signalling that he intends to use his forthcoming presidency of the EU to push for the maintenance of agricultural subsidies.

His administration is concerned to guarantee the high prices agricultural products currently fetch, a line which seems to have some support in the EU commission. One anonymous official noted: "By 2050, humankind will need to feed nine billion human beings, which means that a hectare of land currently feeding four people will have to provide for 6 instead. This is why the CAP has become a hot political topic once again."

Jean Notat, a stock breeder and a board-member of the FNSEA (the French Farmers' Union federation), than adds that current crop prices present cattle breeders with a soaring bill for animal fodder. In certain areas, such as France's Brittany, he tells us that animal feed now accounts for more than 50 percent of production costs. "This is another sign that no agriculture can possibly subsist without public support," he says.

The CAP is, of course, the wrong mechanism, but Notat is not wrong when he says that breeders, and others, certainly do need some sort of support (albeit temporary) if they are going to survive.

But where the commission official is wrong is in declaring that, "the CAP has become a hot political topic once again". Well, he might be right on his side of the Channel. But here, we don’t do complicated issues like that. It's Tories, "biff!", Labour, "bam!" and the theatre critics stand back and applaud.