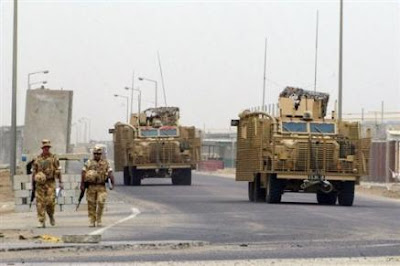 Maliki seems to have made two errors so far. On the one hand, he has clearly over-estimated the capabilities of his own troops. On the other, he has under-estimated the resolve and tenacity of the Shia militias.

As a result – certainly according to the New York Times - his military adventure seems to have backfired on him, with militiamen in Basra in open control of wide swaths of the city, using these areas to stage "increasingly bold raids" on Iraqi government forces.

After five days of fighting, politicians and commentators alike are freely referring to the "stalled assault". Witnesses on the scene are reporting that members of the Mehdi Army have been setting up checkpoints and controlling traffic, in many places ringing the central district controlled by some of the 30,000 Iraqi Army and police forces involved in the assault.

As the violence has spread to Shi'ite districts of Baghdad and other places in Iraq, there are genuine fears that all the security gains achieved over the last year could be at risk. Nadeem al-Jabiri, a Parliament member from the Fadhila Party, believes that, instead of solving the problems in Basra, Maliki has "escalated the situation."

Quite where that leaves the coalition forces is anyone's guess. US aircraft have been in action for the third day running, and British artillery intervened in the ground war to take out a mortar crew which was troubling Iraqi forces. That did not stop, however, mortar bombs raining down in the late afternoon on the area of the Presidential Palace and the Shatt al Arab hotel – the former British base, where the Iraqi assault has its operations centre.

Recognising the gravity of the situation, The Times is suggesting that the future of the whole of Iraq could be decided by the struggle in Basra. And, in a piece in the Sunday Herald, Trevor Royle suggests that this could be the "tipping point" for Iraq as the country slides inexorably into civil war.

Forecasts of such a descent have oft been made and, by the skin of its teeth, Iraq has managed to pull through. But this time it might be different. Moqtada al-Sadr has rejected out of hand the demand that his followers should disarm and is now sitting astride the economic arteries of Iraq. Maliki cannot afford to ignore the challenge and, if he does not have the wherewithal to take on the Mehdi, he is going to have to ask for help. And, unless the coalition is prepared to cede 80 percent of the economy to the militias, they are going to have to give it.

At stake in Basra, says the NYT is not just the prime minister's reputation, his prospects for provincial elections this autumn and control of the Iraqi oil fields, but also an entire coalition strategy of reduced troop levels, steady withdrawal and the turning over of Iraqi security to local troops.

If Maliki's crackdown fails, the paper says, both London and Washington may have to reassess Iraqi army capabilities and the risk of future disaster if coalition forces continue to withdraw. "This is a precarious situation," one US official said: "There's a lot to be gained and a lot to lose."

Much though, it seems, has already been lost. The recriminations have already started, with US accusations that the Brits handed over Basra too early.

But, while the British troops continue to patrol their base perimeter (pictured), there is still no word from Gordon Brown. We understand, however, that Des Browne will confirm later this week that there will be no withdrawal of UK troops from Iraq this spring. Government sources are saying that withdrawal at this time would be "presentationally unacceptable".