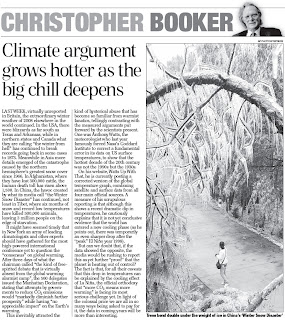 "Last week, virtually unreported in Britain, the extraordinary winter weather of 2008 elsewhere in the world continued. In the USA, there were blizzards as far south as Texas and Arkansas, while in northern states and Canada what they are calling "the winter from hell" has continued to break records going back in some cases to 1873. Meanwhile in Asia more details emerged of the catastrophe caused by the northern hemisphere's greatest snow cover since 1966."

That is the opening paragraph from the Booker column today, where the heavy emphasis needs to be on "virtually unreported in Britain".

As we write, eastern Canada is being buffeted by a winter storm of record proportions, the tail end of a season which, according to Environment Canada senior climatologist David Phillips is one of the snowiest winters in recorded history.

The best the British media can do is a brief mention of the earlier phase of the storm on the BBC website which tells us that the central United States and parts of Canada have suffered one of their worst seasons of winter weather in years.

Chicago, we are informed, is still suffering very cold temperatures for early March, after its snowiest winter in nearly 20 years while the site them offers, without comment the fact that, in Ohio itself, 20.4 inches of snow fell on Columbus - smashing the city's previous record of 15.3 inches set in 1910.

Er … excuse me! The heaviest snowfall in nearly a hundred years?

Underlining the turgid parochialism of the British media, its focus on the weather – as in The Mail on Sunday today is the expected gale for this evening, a topic which attracts over 250 Google News reports.

Yet, picking up from this blog, Booker writes of the humanitarian crisis in Afghanistan and of what they are now calling "the Winter Snow Disaster" in China.

These have not so much been "virtually unreported" in Britain as completely unreported, until we get this brief mention in Booker's column.

But, as Booker writes, the fact that in Afghanistan they have lost 300,000 cattle and the human death toll has risen above 1,500, the fact that in China, six months of snow and record low temperatures have killed 500,000 animals and left three million people on the edge of starvation, is news. That British editors did not think it important enough to print speaks volumes of their distorted priorities and their lamentable values.

Similarly, we got nothing of the New York array of leading climatologists and other experts who gathered last week for the most high-powered international conference yet to question the "consensus" on global warming.

Writes, Booker, after three days of what the chairman called "the kind of free-spirited debate that is virtually absent from the global warming alarmist camp", the 500 delegates issued the Manhattan Declaration, stating that attempts by governments to reduce CO2 emissions would "markedly diminish further prosperity" while having "no appreciable impact" on the Earth's warming.

You can bet that, had this been devoted to the perils of "climate change" calling for more action, it would doubtless have been covered. To prove the point, Google "Manhattan Declaration" and you will get four stories, including this down-page item in today’s New York Times. Compare and contrast the results of "climate change", where you will get 30,952 entries, of which 11 cover the Manhattan conference, without mentioning the declaration.

It is this report which best sums up the media attitude, which makes it a compulsive read.

This is something that bloggers, in particular, could benefit from studying. Last week, I was talking to a "senior government advisor", who bemoaned the fact that the British political blogging scene had not followed the US example of leading the way in focused attacks on the establishment. Instead, he said, it was largely derivative, devoting most of its energies to commenting on media output - thus allowing the MSM to set the agenda.

If the British blogosphere is to have any real impact, we need to start shaping our own agenda. The "global warming fraud" is a good place to start.