An infantile refusal to accept reality 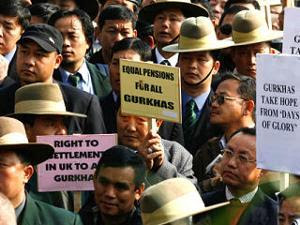 "There are times when the routine irritation we all feel with the idiocies that take place daily in government is supplanted by splenetic anger caused by something truly outlandish."

So writes Philip Johnston in The Daily Telegraph, one of many to add his voice to the growing campaign for equal treatment for Gurkhas.

The particular grievance is that, while Gurkhas who retired from the Army after 1997 may be granted indefinite leave to enter the UK and can then apply to become UK citizens, those who retired before the cut-off date have no such rights.

The technical difference is that, prior to 1997, the Brigade of Gurkhas was based in Hong Kong while, after that – with the return of the colony to the Chinese – the Brigade has been based in the UK.

This may seem only a technical difference, but technicalities are everything – when it comes to EU law. And there, the huge but ever-present elephant slumbers on in the corner of the room, ignored by all and sundry.

Within the framework of reference of this EU law, Ghurkas who were based on Britain – i.e., post 1997 – conform with the entry requirements set out. Those who were engaged prior to that do not. It really is as simple as that.

It is all very well for Philip Johnston thus to write, "It is time to honour our debt to the Gurkhas," but – in the eyes of our government - we have a greater "loyalty" to the European Union, and an absolute obligation to obey EU law.

How interesting it is therefore that the front runner in the campaign to afford "equal rights" to the Gurkhas is former commission official and MEP Nick Clegg, temporarily leader of the Lib-Dims. Yet he, like the others – had they been bothered to find out – should know that our provincial government, in framing the rules, is bound by the provisions of the EU law, and has no room for manoeuvre.

Nor should the fact that the EU increasingly governs our immigration law come as any surprise. Since Maastricht – under the Justice and Home Affairs chapter – immigration policy has become a competence of the EU and, progressively, the EU is working towards a Common Immigration Policy, defining the rules under which third country nationals may enter.

The details of the elements for a common EU immigration policy were set out at the October 1999 European Council in Tampere (Finland) and confirmed in 2004. We – or, in this instance, the Gurkhas – are now paying the price.

Furthermore, as long as we are members of the European Union, this is how it must be. Third country nationals who become British citizens also acquire rights as "EU citizens", set out in the infamous Directive 2004/38/EC. These include the rights to bring in their spouses, parents, parents-in-law and children, all of whom then acquire citizenship rights.

So it is that the EU must set the rules, which define not only entry to the UK but to the whole of "fortress Europe", and the UK has no choice but to obey.

What we have here, therefore, is another example of the infantile refusal of the "chattering classes" to acknowledge and accept that, in many respects, we are no longer an independent nation and that our rules are set by our supreme government in Brussels.

How much easier it is to wax splenetic at the injustice of it all and to pontificate endlessly about what the government should or should not do, rather that grow up and accept the reality of what we have become - an offshore province of the European Union.