Is there anyone at the helm? 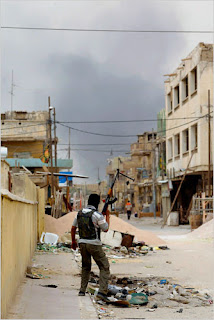 It is hard to agree with the BBC's news values, which elevates the baggage-handling glitches in Heathrow's new Terminal 5 to the status of a national crisis – running it as lead item on all its bulletins.

This is by no means the first new terminal which has had teething problems – Denver and Hong Kong come to mind – and any damage done to Britain's reputation will be transitory and quickly forgotten.

Not so the mounting crisis in southern Iraq, to which the BBC allocated the sixth slot on the early evening television news - allowing just thirty seconds for the newscaster to tell us that Bush had said that Iraq was facing a new "defining moment" – with no mention at all on the main radio World Tonight bulletin.

We make no apologies, therefore, for returning to the subject. Our media and politicians may want to run and hide – but in every sense Britain's international reputation is on the line. The behaviour of our government over the next few days, good or bad, will have a lasting effect. Bush is absolutely right – this is a "defining moment", but for Britain as well as Iraq.

The Times makes no bones about it, headlining that "…civil war looms with Shia militia", retailing an account that RAF Tornado GR4 bombers had flown low over the city and fired warning shots at positions around Basra. Meanwhile, the heavily armed 1 Scots Guards battle group, equipped with Challenger 2 tanks and Warrior armoured vehicles, was on alert and ready to leave its fortified base.

This paper tells us that the Iraqi Army has not yet asked for British troops to join the battle against Shia militia, which left the remaining 4,000 troops sitting watching from Basra airport, "as the Iraqi Army it helped to create struggled to defeat militias the British allowed to flourish in the city".

As an indicator of the extraordinary pressures building up under the surface, we are indebted to The Daily Telegraph. In an uncorroborated piece - which nevertheless has the ring of truth - its headline is, "Rift between UK diplomats and Army in Basra," with Damien McElroy writing that British forces are facing increasing pressure to intervene in fighting. He tells us that, "Signs of a rift were growing among British officials as diplomats said that UK forces 'stand ready to support' Iraqi soldiers as and when requested, contradicting military statements that UK forces would be confined to 'niche' roles."

This is contrary to what one might expect – the military being keen to intervene while the foreign office holds back, but McElroy says otherwise. He cites Christopher Prentice, the ambassador to Iraq, who has "signalled his differences with the MoD" in a statement: "British Coalition Forces, in their overwatch role, stand ready to support Iraqi Security Forces operationally, as and when the (government of Iraq) requests this."

This contrasts with official military spokesman, Major Tom Holloway, who states that coalition intervention would be confined to "niche" capabilities, declaring that, "as we speak we are not planning to go to the city." 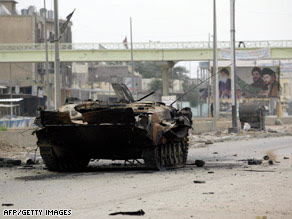 On the other hand, an analysis from The Washington Post has an unnamed advisor to Maliki conceding that outside help was needed. He says, "I think the government can't win this battle without interference of Americans or British," adding: "I think the aid or assistance is on the way." And well it might, with CNN reporting that the Basra fight is "not going well" - hardly surprising if the militia are taking out Iraqi Army armour (pictured)

Nevertheless, The Telegraph cites a "British official based in Baghdad" who says that despite the British ambassador's statement, "Army chiefs appeared determined to resist Iraqi and American pressure for British troops to reinforce local units." This official has it that, "It's ridiculous for Britain's position in Iraq that we've got this firepower down there and we're not willing to help the Iraqis out." Yet, he says, "The Army won't even listen to suggestions it might be needed."

Just how true this all is we have no immediate means of knowing, but the very fact that The Telegraph is signalling disagreements between arms of government suggests that there should be rapid political intervention, to set the British position clear. So far though, all we have from Downing Street is that it is, "not really appropriate to comment on operational matters." This is an operational matter?

But it looks as if time is running out. Red Cross and other welfare organisations are concerned that food and water shortages are creating a humanitarian crisis in the city. Presumably, we can expect a statement from Brown in parliament on Monday although, as things stand, the situation may deteriorate before then, which might force the prime minister's hand.

Even now, though, the lack of comment and signs of leadership from the prime minister do not bode well. The lack of leadership and direction is beginning to show, which makes you wonder whether there is anyone at the helm – and, for that matter, whether anyone cares.