Who are the masters now? 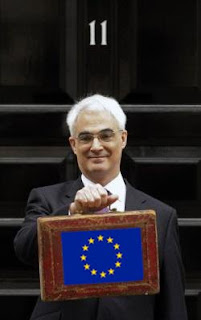 It was supposed to be a "green" budget. And so it was, to an extent. Out of 178 measures (and 68,000 words), Darling added fifteen under the heading "protecting the environment".

Says The Daily Mail, by 2010, the year in which they will all have been implemented, they will increase the amount we pay to the Treasury by a total of £1.7 billion.

But that is far from the end of it, says this paper. In an obscure table entitled "other measures announced since Budget 2007" - in other words ideas the Treasury has had since this time last year - there are more environmental protection plans, for example aviation duty and capital allowances for biofuel plants. These will raise taxes in 2010 by a total of £605 million.

Thus, the government will have increased our annual tax burden under the guise of greenery by nearly £2.4 billion. And nor is that all. Another £500 million of green taxes, announced in last year's Budget, are also due to bite in 2010. So the total green tax grab is nearly £3 billion.

So, as far as it goes, it is all take and no give. Now, there was a time once when chancellors gave a little back by way of incentives, to encourage particular behaviour. And rampant "greenery" should be no different – otherwise we might just get the impression that "saving the planet" is just another government tax scam.

Well, actually, it is no different. Former chancellor Brown certainly does want to reduce taxes to "help protect the environment". What he has in mind, we learn is cutting VAT on low-energy light bulbs and fridges, as well as other "green" goods.

But, as we all know, this cannot be done unilaterally. All the member states must agree – as Chirac found to his cost two years ago.

So it is that little Gordie is going toddling off to Brussels to meet his masters, dressing up his exercise in applied grovelling by "renewing" his call for the VAT cut. In his own words, he tells us: "I have submitted a proposal which I hope we will discuss on Friday, that we look at how we can give new incentives for people to use environmentally-friendly products."

How the mighty have fallen. The prime minister of a once great nation wants to reduce taxes. So, the day after the Budget he goes dashing off to Brussels, whence all he can do is "hope" that his "proposal" will be discussed.

And that is by no means limit of his indignity. There are one or two other things.

So who are the masters now?