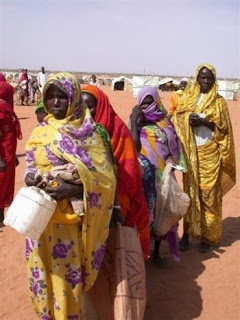 With great fanfare, the EU commission has today announced its "biggest-ever food aid package". This amounts to €160 million ($243 million) "to help alleviate hunger in Africa, Asia and the Middle East."

"Vulnerable people in many of the world's poorest countries are increasingly exposed to natural disasters, conflict and economic pressures that can rapidly lead to situations whereby people go hungry," says EU humanitarian aid commissioner Louis Michel. "The European Union has an essential role in providing them with food aid, and in restoring food production."

Michel continues with the self-adulation, declaring that the funding decision is the largest ever of its kind by the commission's aid department and more money will be allocated later in the year. This is to aid "around 18.7 million people" who, says the commissioner, "will benefit directly from the aid, including children and young mothers, refugees and areas hosting refugees."

Then spokesman, John Clancy, pitches in, telling us that the commission had already taken into account the recent spectacular rise in food prices, which had seen the price of wheat shoot up by 81 percent last year. He also assured that more funding would be found if necessary, perhaps from the EU's emergency coffers.

However, what the commission does not say is how much emergency food aid was provided last year. Checking the records, we find it was €135 million to alleviate world hunger. Furthermore, in this year, the commission was estimating that 12.5 million people needed help.

So, by the commission’s own estimation, the price of wheat has gone up 81 percent (it has actually increased by about 120 percent) and the number of people needing aid has increased by 50 percent (49.6%) and it is increasing its aid by 18.5 percent.

By any measure, that means in real terms, the EU is providing very substantially less aid this year than it did last year. To achieve parity on a per capita basis, it should be contributing at least €320 million, twice what it is actually giving. No wonder the World Food Programme is considering food rationing.

But then, that is the EU for you – black equals white, and more equals less.