The trouble with budgets 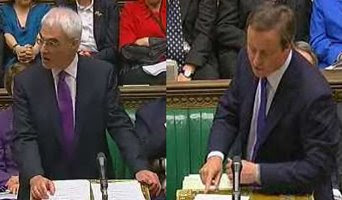 The worst of it all is that, when you listen to the chancellor, everything in the garden is rosy and, although global financial turbulence poses a "major risk", Britain is "better placed than other economies to withstand the slowdown". You then listen to Mr Cameron and you get the impression that the nation is falling apart – all down to Labour of course.

The natural thing to do is take the middle line. As the figures waft through the ether, a meaningless cacophony, the mind says it is probably not as good as the one says, or as bad as the other claims. But, just to make sure there is no consolation if it is even worse, Darling has put up prices of fags and booze.

The "experts" though, i.e., the Financial Times, home in on the growth rate forecast, which Darling has cut for 2008, from the three percent in last autumn's pre-Budget report to 2-2.5 percent this year. But, ever optimistic, he estimates growth will recover to between 2.25 percent and 2.75 percent in 2009.

Listening to the pundits – and with the US economy already in recession – it seems unlikely that these growth forecasts are anything other than wildly optimistic, but this is what we are used to with government forecasts. They inhabit the realms of unreality to such an extent that we can only shake our heads and wonder.

However – there is something in the budget that is of more than a little interest. Darling is claiming that he expects to spend £2 billion more on defence this year, including £900m on new equipment. Will that dampen down the claims of a £1 billion "black hole" in the defence budget? And is it even real money – or just a recycled announcement?

We wait and watch.