He doesn't get it 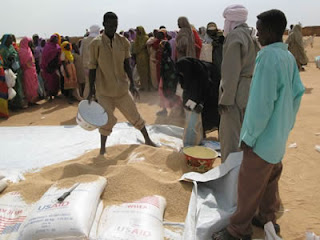 After banging on about the impending global food crisis for some months, we were mildly gratified today to hear BBC Radio 4's PM programme run a piece conveying: "Warnings over future food crisis". Ah, we thought, they've caught up at last.

Sadly though, this is the BBC, so it was not to be. Instead, we get a truly inane piece from the government's new chief science adviser, Professor John Beddington. He tells us that, "a world food crisis can be expected in the coming decades as our demand for food outstrips our ability to produce it." What is more, says Beddington, "the crisis could be as serious as climate change and may hit sooner."

The ironic thing is that, even within his own frame of reference, the man is inconsistent. On the one hand, he tells us that the world's 6.5 billion population is expected to reach nine billion by 2050 and that this, combined with growing consumption as poverty is alleviated, will put huge pressure on food supplies, he said.

Then, on the other hand, he tells us that climate change is expected to worsen the problem, reducing rainfall and affecting crop growth. Added to this, he also says, efforts to tackle climate change - by using biofuels instead of fossil fuels - are taking more land away from food production.

The point, of course, is that climate change, according to the pundits, is set to spread poverty and misery throughout the globe, yet Beddington is telling us that the big problem is that poverty is being alleviated. Could that be, one wonders, partly due to global warming?

Anyhow, these are but minor quibbles. More importantly, with the global economy teetering on the brink of recession, and the economic system poised to collapse, it is rather bizarre that we have the government's chief scientific advisor arguing that increased prosperity is an issue.

However, even that pales into insignificance when one looks at the man’s timescale. Given the problems we are currently experiencing with the global food supply which, as our many posts indicate, are set to get much worse, it is frankly bizarre that he should be thinking in terms of decades. By any measure, we are talking in the here and now, with the next couple of years being absolutely critical.

This man is showing the same lack of engagement that we are seeing in Brussels. He is beginning to look at least as bad as his predecessor.