Freedom of speech is a European value but ... 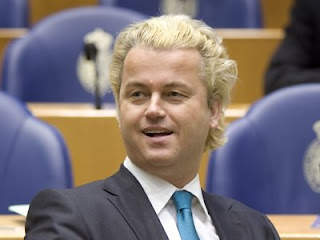 Though Geert Wilders’s film Fitna, which is less than totally complimentary about Islam, the Qu’ran and, above all, terrorism committed in the name of Islam, is now available on the internet, I am actually finding it hard to link to it. Some of our readers might have better luck, though, as Charles Johnson on Little Green Footballs points out, some of the scenes in this 15 minute film might be harrowing.

In other words, I am not in a position to pass judgement on the film. It may not be particularly accurate and it may confuse Islam with Islamism. Other people who have seen it, think that it is hard going but not particularly offensive to anyone who is not out there wanting to be offended and is threatening to kill anyone who suggests that Islam is not the most tolerant religion under the sun.

In any case, the suggestion that almost all recent terrorist activity has been carried out by Islamists who quote the Qu’ran to justify their behaviour is hardly contentious.

As Robert Spencer on Jihadwatch details, the protests in the Muslim countries have started already, because, as we know, Pakistan, Iran and other countries of that kind know all about freedom of speech and respect for other religions.

England Expects discusses the BBC article on Geert Wilders and the omissions in it, such as the fact that Mr Wilders’s name was on the piece of paper that had been skewered to the body of Theo van Gogh (spelling Mr Towler/Harvey!), the murdered film-maker.

The various protests by the Muslim countries and, inevitably, the Organization of the Islamic Conference (OIC), another expert on freedom of speech and tolerance, has acquired an unexpected and somewhat confused supporter. Yes, dear readers, you have guessed it – the European Union, that embodiment of European values, among which freedom of speech always seems to come high. (Though, as I have already pointed out in what is still a half-finished posting, the concept of freedom of speech is an inadequate and unhelpful one, easily destroyed.)

The Iranian Foreign Ministry has called on Britain, the Netherlands and the European Union to ban the film and has spoken particularly harshly about this country because the website that is hosting the film, LiveLeak, is based here. 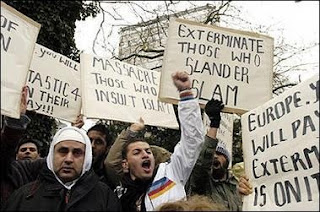 The film is described as “dirty” and provocative whose intention is to insult and, no doubt, hurt Muslims. This should not be allowed, the Iranian Foreign Ministry maintains. And if it is, there might be violence as Muslims yet again display their rage at being so insulted.

LiveLeak issued a statement Thursday saying there was no legal reason not to allow Wilders to post the film. It said the site's policy is to remain unbiased and allow freedom of speech. Some in the Muslim community rejected the film as nothing more than dangerous anti-Islamic propaganda.

"This film is a direct attempt to incite violence from Muslims and help fan the flames of Islamophobia," Arsalan Iftikhar, a contributor to Washington-based Islamica Magazine, told CNN on Thursday. "Any reasonable person can see this is meant to spit in the face of Muslims and insult our religion."

Iftikhar said he doubted the film would spark the same type of violence that followed the publication of the caricature of Mohammed, but he called on Muslim leaders to react peacefully.”

As the film is on the net, it might be a little difficult for imams to travel round some Middle Eastern countries with fraudulent versions of it as Abu Laban did with the Danish cartoons as we wrote here, here and here.

Meanwhile, what has been the EU’s reaction? Well, not very helpful to those of us who believe in freedom and prefer to think that if we must have governments, they should be there to protect our liberties from those who are threatening them.

"We reject this interpretation," Balkenende said in a statement. "The vast majority of Muslims reject extremism and violence. In fact, the victims are often also Muslims."

Slovenia, which holds the rotating EU presidency, said Friday that it supports the Dutch government's position and believes the film does nothing to promote dialogue among religions.

"Mutual tolerance and respect are universal values we should uphold. We believe that acts, such as the above-mentioned film, serve no other purpose than inflaming hatred."

Well, if the Slovenian government can direct me to examples of that “mutual tolerance and respect” and explain how many other parts of the world think of them as “universal values” I shall be very happy.

It would also be quite useful if some of these politicians would explain how suppressing our liberty could possibly help the Muslims who are fighting for theirs.

I mean, these people wouldn’t be afraid, would they? After all, you know, some of those alleged believers in mutual tolerance and respect go around demanding that all those who insult Islam be executed, massacred or exterminated.

In the circumstances, I can’t resist it: here is a not very well known clip from that wonderful film with Judy Garland and Mickey Rooney, “Babes on Broadway”. It is sort of appropriate. Enjoy! But have a hankie at the ready.

LiveLink has announced that it has had to take the film down because of threats to its staff. This appears to be a victory for the forces of terror and censorship as well as the pusillanimous politicians of the EU and SecGen Ban Ki-Moon, who, inevitably, condemned the film. On the other hand, the film has already been seen by millions of people and is still available on many other internet addresses. Here are some more links.
Posted by Helen at 19:42