News from the House of Lords 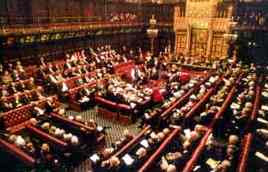 Reading questions and debates in the House of Lords Hansard record is not as inspiring these days as one would like it to be. There is, as it happens, little new in the inability to get the Government to give straight and honest answers as far as the European question (or many others) is concerned. I recall similar passages in the past, including the past that was under a Conservative government.

There have been some changes, however, and mostly for the worse. The disappearance of most hereditary peers, who took their jobs seriously and worked hard on committees as well as taking part in debates on subjects they knew something about, has been a very bad development. In case anybody throws the word backwoodsmen at me, let me point out that those who were not interested in the House of Lords work, rarely turned up and even more rarely spoke. I see nothing wrong in people debating only on subjects they know and care about. Their loss on the committees has been palpable.

There are mutterings about the difficulties committee chairmen find in getting members to sit on them. This is not surprising. You do not get paid for sitting on the committee, attending weekly sessions, listening to witnesses, reading voluminous evidence and discussing the report. All very hard work and, let me emphasise again, unpaid. Tony’s and Gordon’s luvvies are just not up to it.

Recently there has been a trend of thinnish reports, a development I greeted with joy at first. Then I realized that these were not really reports at all but merely transcripts of an oral session with a few notes about topics discussed and, sometimes, very brief summaries. The recent “Current Developments in European Defence Policy” is one example of this attenuation.

Then again the report on the Constitutional Reform Lisbon Treaty, published on Friday, seems to be of decent size and seriousness. [Actually, it is more than of decent size being two tomes of about 300 pages each.] What the content is like, remains to be seen. As Lord Pearson has pointed out on numerous occasions, the European Union Committee is now packed with europhiliacs and people who prefer not to rock the boat.

Going back to their lordships’ benches. The departed hereditaries have been replaced by an astonishing number of placemen and women, the great and the good, people who can be relied on by the government to toe the line. Notoriously, Tony Blair created more peers than all his recent predecessors put together. Gordon Brown appears to be no slouch in these matters either.

This does not always work for the government. Partly because many of those luvvies and placemen realize that being active in the Upper House is hard work with no remuneration. Stuff that for a game of soldiers, one can almost hear them cry.

Furthermore, there is something about the House of Lords that acts beneficially even on the most rascally MP or Quango Queen. (Well, less so on the latter who retain their self-righteous arrogance.) But too many appointees, having achieved their position on the red benches and realizing that it cannot be taken away from them, start thinking independently. Not much of this has been translated, as yet, into a clear-eyed view of the European project (though there was the spectacular case of Lord Dahrendorf’s conversion) but the question of a referendum may sway them.

Another reason for there being less action among their lordships at the moment on the European question is sheer tiredness. People who have been fighting this battle for fifteen years against both governments and front benches have had enough, though the spark is there and, I have no doubt, will be ignited when the Treaty is debated.

Incidentally, I heard Peter Lilley speak briefly at a Social Affairs Unit book launch on Thursday and he made rather demanding comments about him hoping that the House of Lords will do its duty over the referendum amendment. I think members of the House of Commons should talk a little less about other people doing their duty until they remember what their own is.

Still, there are some questions and some attempts to get HMG to do something more than just obfuscate in a mock-witty fashion. There were two last Tuesday.

Lord Lyell asked HMG what was their definition “of a constitutional treaty for the European Union” to which Baroness Ashton of Upholland who is the Lord President of the Council replied:

Note that phrasing well, it will be used a great deal more in the debates about the possible referendum amendment. The Constitutional Reform Lisbon treaty merely amends the existing treaties thus producing a completely new treaty and changing the constitutional structure in major ways but it does not repeal the existing treaties or refound the EU, whatever that may mean.

Lord Lyell, as is the custom in the House of Lords, followed his original question up with a supplementary:

My Lords, I am very grateful for and fascinated by the noble Baroness’s Answer, but will she be kind enough to enlighten me on why the Foreign Affairs Committee of another place pointed out to people such as me that there is no material difference between the constitutional treaty and the Lisbon treaty? The Foreign Secretary, no less, thought there should be a referendum to approve the first, but on the second he has apparently changed his mind. What caused him to change his mind?

The question about the Foreign Secretary is rightly treated as being of no importance at all. He was told to change his mind and so he did.

What is far more interesting is the reaction to the House of Commons Foreign Affairs Committee report. Normally, there is an assumption behind the HoL debates that the elected House, however idiotic its behaviour, takes precedence.

In this case, the subject is dismissed. The good Baroness does not deign to reply and Lord Tomlinson a Labour hack of some standing dismisses the whole thing out of hand:

My Lords, will my noble friend the Lord President agree that the report that came from the House of Commons is empirical proof that democratic elections do not necessarily produce all the wisdom that is available in a Parliament? Furthermore, will she have great confidence in the report being produced by your Lordships’ European Union Select Committee, which I am sure all Members of the House, including the noble Lord, Lord Lyell, will find of great value when it is.published?

Well, the Report has now been published and it is of little relevance to the subject of whether there should be a referendum or not as the remit of the enquiry did not include that subject.

The Foreword explains what the purpose of the Report is:

This report assesses the impact of the Treaty of Lisbon. The Government are asking the two Houses of Parliament to enable them to ratify the Treaty by passing the European Union (Amendment) Bill. This report aims to inform the House of the most important aspects of the Treaty, by comparing its provisions with the status quo, and assessing their impact on the institutions of the EU, on the Member States in general and on the UK in particular.

It concludes with the words:

This report does not compare the Lisbon Treaty with the now abandoned Constitutional Treaty which, though ratified by some Member States, was rejected by French and Dutch voters in referenda in 2005. It does not comment on the process by which the Lisbon Treaty was produced. It is not a commentary on the European Union (Amendment) Bill; and it does not address the question whether there should be a UK referendum on this Treaty.

Finally, we have heard different views on whether or not the Treaty is beneficial to the UK. This report does not offer an overall assessment, or a view on whether the UK should or should not ratify the Treaty. That is now a matter for Parliament.

So we are left with the HoC Foreign Affairs Committee that was firmly of the opinion that this Treaty is not sufficiently different from the Constitution to make it, well, different. But, of course, what matters is that concept.

The same day saw another Starred Question, this one from Lord Eden of Winton, this time a Conservative politician:

Whether, in the light of the Lisbon treaty, they will put forward any proposals to change the parliamentary scrutiny of European Union legislation.

This is one of the biggest red herrings in the whole debate. There are endless discussions about parliamentary scrutiny of European Union legislation as if it actually mattered. Quite apart from the fact that scrutiny is impossible with the amount of paper that comes out of that environment-conscious institution, it is also clear to all but the meanest intellect or politicians (but I repeat myself) that scrutiny is not the same as legislation.

You can scrutinize all you like. If you cannot reject the legislation, it is a pointless waste of everybody’s time. As to be expected, Lord Tebbit has grasped this point:

My Lords, what is the mechanism by which either the British people or their Parliament may veto a law that comes from the Council of Ministers and has been approved by national Governments?

Well, of course, there is no mechanism and Baroness Ashton had to improvise rather fast:

My Lords, I have been very clear that the proposals that come forward from the European Commission can be debated and discussed in Parliament. I know that is not what the noble Lord asked me; he asked me about vetoing what national Governments have put forward. The national Government, in collaboration with the other 26 members, will debate and discuss issues of concern and will represent this country appropriately in the national interest of this country.

Well, naturally, that is so easy to do when ever more areas go under Qualified Majority Warning (QMV) and most decisions in the Council of Ministers are reached by consensus. No wonder Lord Tebbit smiled and, naturally enough, annoyed the good Baroness who reminded him that his government “did more to enhance the cause of Europe than probably any other”.

Whether that is true or not, in the circumstances should the Noble Minister not approve of that? Why exactly is she using it in a game of childish tu quoque?