That is what we do

It is always something of a landmark for a blog when the hit counter turns up with a big round figure number, and this is no exception. Earlier this morning we turned the magic 4,000,000 hits.

We thank our readers for bearing with us – this our fourth year of operation, which makes us positively geriatric in blogging terms.

For a blog that was set up in 2004 specifically to fight the EU referendum on the EU constitution, it is ironic that we should reach this point on the very day that our hopes of a referendum on that self-same constitution (in all but name) will be dashed.

Clearly, 6,679 posts and what must be millions of words, has had no effect whatsoever on the political process. That tells its own tale, which makes us wonder why we bother. We are not in this for the fun of it, or self-glorification. Our aim is to achieve change.

When asked why we put so much effort into the process, I resort to the tale of the scorpion and the fox. 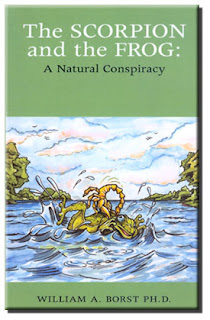 For those who haven't heard it, in brief – a scorpion on its travels comes to a wide river which it cannot cross. Happily, it sees a fox frog about to swim the river and begs for a lift. The fox frog demurs, saying that, if he carried the scorpion, he would risk being stung and possibly die.

The scorpion points out the obvious. "If I sting you while we are crossing the river and you die, since I cannot swim, I too will die." The fox frog sees the logic of this and allows the scorpion to climb onto his head.

Half-way across the river, however, the scorpion lifts its tail and delivers a mortal blow to the fox frog. In his dying breath, as he sinks below the surface, taking the scorpion with him, the fox frog gasps: "Why?"

The scorpion shrugs his shoulders, and says: "That is what I do".