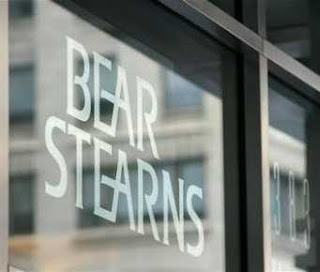 The Times tells us that fear now stalks the corridors of the Canary Wharf headquarters of Bear Stearns.

"There is a whiff of 1929 about all this," says The Financial Times and Edmund Conway in The Daily Telegraph tells us this is the "Financial markets' biggest test since 1930s".

Of all the nightmares dreamt by finance boffins, this has to rank among their worst, Conway writes. "One of the biggest investment banks in the world is now only a fingernail's grip away from going bust. The very firmament of global finance has just ruptured, and while one can only guess at the probable effects, they won't be pretty."

Ambrose Evans-Pritchard argues that, "You have to go back to the banking crisis of the Great Depression to find a moment when the financial system as a whole seemed so close to the precipice."

On the other hand, we have Alfred E. Goldman, chief market strategist at A.G. Edwards & Sons Inc., telling us: "I think what we have is a Bear Stearns crisis, not a stock market crisis." He adds, "Right now, I'm not aware of any other major brokerage firms or banks that have this type of solvency problem."

What are we supposed to think?