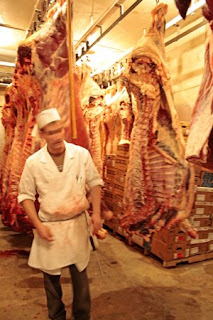 A hare started by the Daily Record on the "banning" of Scottish mince is rapidly gaining currency, having evoked a piece in The Daily Mirror and a staunch condemnation in The Scotsman.

Billed as an "exclusive" by the Daily Record, journalists Craig McDonald and Charlie Gall, under the headline, "Butchers vow to fight planned EU ban on Scottish mince", tell us that, "Battling butchers launched a last ditch fight to save traditional Scottish mince from meddling Eurocrats yesterday."

"Brussels penpushers", we are told, "want to end the sale of properly aged beef mince - to prevent foodies poisoning themselves with raw steak tartare," with the inevitable consequence that, "Farmers and butchers say the move will push up prices and make the family favourite less tasty."

Even "food bug expert" Hugh Pennington is enlisted to the cause, brought in with a quote to declare, "…the new rules won't make beef any safer". World Scotch pie champion Amos Smith is also recruited. He tells us, "It is stupid meddling and a lot of nonsense," adding, "Why should we have to fall into line for something which is about France and steak tartare? What about our culture and our mince?"

A lot of nonsense it certainly is, only the nonsense is the story produced by the fearless Daily Record hacks. Not only is it not true, what is being pushed is the exact opposite of the truth.

What McDonald and Gall are claiming is that, while "our butchers" traditionally hang meat for 14 to 28 days to give it flavour before cutting the carcass into joints, new (EU) health rules state meat used to make mince should be cut less than six days after an animal's slaughter.

We are then informed that the Food Standards Agency "opposed the moves but have admitted defeat and are now in the process of informing butchers and food processors that the new rules must be implemented immediately." And, to cap it all we learn that, "It's feared the regulations will also push prices up as meat has to be processed more quickly - or binned if it misses the six-day limit."

So, where does this all go wrong?

Strangely, it was then that The Scotsman weighed in with its own story about banning minced meat, to which we responded with our own piece pointing out that the "ban" did not apply to local butchers producing their own mince for immediate sale.

What has brought this up again, however, is not a ban but precisely the reverse. In October last year the Food Standards Agency issued a consultation on a "national measure". That proposed lifting the 6-day restriction specifically "to enable the continuation of the English tradition of ageing meat that is used to produce minced meat".

However, since issuing the consultation, the Agency has been told that this national measure was not acceptable to the EU commission – in its current form. It had to be re-worked and notified "as a technical standard" rather than an adaptation of the hygiene legislation. The Agency is considering this and is consulting industry on the way forward, which means that the eventual aim of lifting the restriction is still in hand.

So far from reality is the piece, however, that it is worth a study to see quite how the journalists managed to build up a huge raft of quotes, based on a complete misunderstanding of the situation.

And, with the virus firmly embedded in the system, The Scotsman is a sheer delight. "Tell Eurocrats to go hang - this reheated idea is still pure mince," writes Hamish Macdonell. Alongside is The Daily Mirror which declares: "Minced beef and lamb could rise by 40p a pound," plus an editorial from the The Daily Record, completing the circle of pure fiction.

Sadly, one blogger has already fallen for it while another has partially debunked the myth.

The former presents the Daily Record story as, "the case for hanging EU bureaucrats". As a matter of principle, we believe they should be hanged. But not on this, another salutary example of how you can never afford to take media stories at face value.