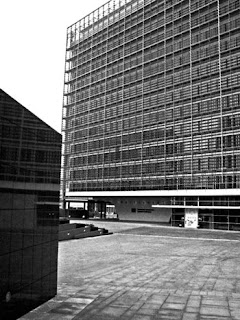 Today is the day that MPs vote themselves closer to obscurity if, as is widely expected, they defeat an amendment for a referendum on the constitutional Lisbon treaty.

If they needed any reminder why they should allow a referendum to go ahead – the last, best hope of slowing down the encroachment of European integration - they need only look to Brussels where our supreme government was hard at work yesterday, achieving nothing at all.

It was there, in Brussels, yesterday, that the finance ministers of the 27 member states met to consider the ultimate bureaucratic nightmare, the reform of the VAT system in a bid to curtail the fraud which has siphoned billions out of the coffers of the member states.

It does not matter how many times I write about this issue – most recently on 23 February. I am always staggered by, on the one hand the sheer scale of the losses suffered through this system – real money which goes into the hands of crooks, fraudsters and even terrorists.

The scale is such that even the commission has given up trying to eliminate it, but they continue to try to adjust this unworkable tax, in a vain attempt to stem the losses. That much was the substance of our February report, when they proposed a new scheme of such complexity that even the "colleagues" had some reservations about it.

According to Reuters, the proposal has fallen foul of the finance ministers, who failed to approve the scheme. In a move which typifies the way the EU works, the ministers have decided to delay any further moves for a "few months" in the hope that they can then get closer to an agreement.

One of the main supporters of the scheme is Germany, which estimates that even this modest scheme could, if implemented, save it about €3.5 billion, which gives you some idea of the scale of the fraud – not dissimilar to that being experienced in the UK.

Now, imagine that this system was totally within the "competence" of the British government. Imagine also that it had become aware of a "loophole" in the tax law that was costing it billions of pounds each year. How long do you think that loophole would remain?

But, being VAT, the system is not within the jurisdiction of the British government. Neither ministers or officials in Whitehall nor MPs in Westminster can do anything about it, without the active support of the commission and the agreement of the other 26 member states. So, nothing is done, year after year, as funds continue to flow out of the Treasury, supporting a massive criminal enterprise.

And, because this is a Brussels competence, neither does the government talk about the problem. Nor does the opposition and, taking a lead from the politicians, nor does the media.

Yet, only a government which is utterly mad, totally corrupt or fundamentally inept would tolerate such a system which costs so much money, only to line the pockets of criminals. Just the billions which are lost each year in the UK could make a sizeable dent in the defence budget.

The government, of course, is in Brussels, and it does tolerate the system – year, after year, after year. That tells you all you need to know about the European Union. And it is this utterly mad, totally corrupt and fundamentally inept government that parliament tomorrow is going to support by rejecting a referendum.

That tells you all you need to know about our parliament.