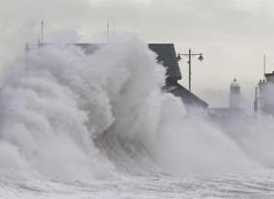 Even the most sanguine of financial commentators seem to have come away with the view that Darling has been complacent to the point of recklessness. His comforting assessment of UK growth rates, combined with an almost total lack of any measures to promote growth in the economy, suggest a government that has not even begun to wake up to the impending crises.

Ambrose Evans-Pritchard in The Daily Telegraph thus observes that, not since Labour's Philip Snowden delivered the Budget in 1930 has any Chancellor offered an accounting more certain to be swept away by hurricane forces of global finance.

Even as Darling was promising two percent growth this year, the US authorities were battling to head off the implosion of America's $11 trillion (£5.44 trillion) mortgage finance industry and a pair of big-name banks. Ambrose cites former US Treasury Secretary Lawrence Summers, telling us we are facing "the most serious combination of macro-economic and financial stresses in a generation, and possibly, much longer than that."

Closer to home, we get Prof Peter Spencer of York University saying that, "We're in a vicious downward spiral," adding that current initiatives "are doing little to stop the crisis spreading. Banks are running out of capital."

Already, there are signs of this, with Reuters reporting this morning that the FTSE index is on the slide as the effect of last week's central banks cash injections – amounting to an unprecedented $200 billion – are beginning to wear off. 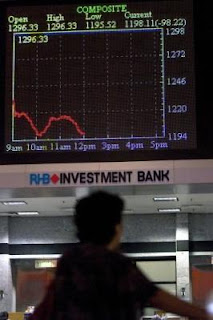 Says Spencer, "the risk of a credit contraction is incalculable," but already – as Ambrose writes - Canada has stalled. Japan is teetering on the edge of recession. Tokyo's stock market has suffered the worst New Year slide since World War Two, led by Honda, Sony and the export giants that live off the US market. The Nikkei index is down a third since July. The Shanghai bourse has dropped even harder. China is having to jam on the brakes to curb inflation.

Italy has buckled. The economy contracted in the last quarter. The housing bubbles have burst in Spain and Ireland. Unemployment is now jumping across most of the Club Med bloc.

"This then is the darkening world closing in on Mr Darling… He has few defences," adds Ambrose.

Meanwhile, Brown is off to Brussels today where he will commune with (part of) our real government. There, the agenda will be dominated by – you guessed it – "climate change", while the "colleagues" are preening themselves that the "EU's economic fundamentals remain sound." Far inland in Brussels, they will not be hearing the crashing waves breaking on our shore. Still less will they even begin to understand that the "perfect storm" in the making has nothing to do with "climate change" but everything to do with a tsunami of global economic incompetence, of which Mr Brown's own government is part.

At least, by the time we are totally submerged, "climate change" will at last be seen for what it is – expensive displacement activity of no importance whatsoever.