Count-down to an amendment 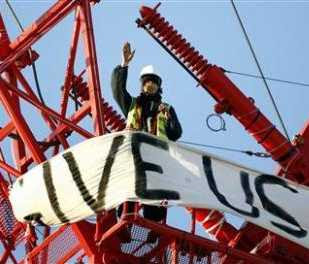 Despite the clarion call for a referendum on the constitutional Lisbon treaty – represented by the series of mini-referendums – the government is showing itself totally unmoving on the issue.

With the crucial vote on the referendum amendment tomorrow, the BBC tells us that Europe Minister Jim Murphy is telling MPs that it is up to parliament to decide "whether it’s the right thing to do to have a referendum on the Lisbon Treaty or not."

And with leaden predictability, Murphy is sticking to the mantra, that "constitutional approach" has been abandoned – even getting that wrong. It started off as the "constitutional concept" – a sleight of hand on which the government has relied from the very start.

At this late stage, however, Cameron is entering the fray, with The Daily Telegraph reporting that he is challenged wavering Liberal Democrat MPs to desert their leader Nick Clegg.

This, though, is a move to exploit growing discontent in Lib Dem ranks about Clegg's EU policy. It comes after a poll which suggests the party could lose 15 seats if it refuses to back a national vote on the treaty.

Nevertheless, Tory intervention could prove counter-productive, turning an issue of principle into a tribal contest, which could well have the Lib-Dem MPs falling in behind their new leader.

At the moment, Clegg's plan is to whip MPs to abstain on the main Tory amendment, but Nick Harvey, the Lib Dem defence spokesman, is now pushing for a rebel Labour amendment demanding a two-question referendum. This would ask whether Britain should stay in the EU, as well as asking whether or not the treaty should be ratified.

To support this move, Clegg is citing a Mori poll which has 38 percent of voters wanting an "in-out" referendum, compared with 18 percent want a vote on the treaty. But, to add to the confusion, the I Want a Referendum campaign issued the results of a poll of Lib Dem voters showing that 67 percent wanted a ballot on the treaty.

Effectively, with the opposition parties at odds with each other, Brown simply has to sit tight and keep repeating his mantras. As long as Clegg then holds the line, he has it in the bag. But, at least, we might as well get some entertainment out of it.