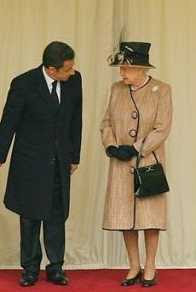 So, Nick the Sark, complete with elevator heels, has met Mrs Betty Windsor, EU citizen. And, as well as being a "colleague", sitting on the European Council alongside our prime minister, our Nick wants to be friends as well.

Particularly in the frame is "co-operation" on the economy and immigration, the latter undoubtedly meaning that we should take more of the human flotsam which ends up at Calais. In return for that, we get to send little Gordy to Washington to plead with Bush to stabilise the dollar so that France doesn't have so many problems exporting to the United States.

Nick is also suggesting that he might send another 1,000 troops to Afghanistan – under terms and conditions as yet unspecified – the deal being that France rejoins Nato and a French general takes over its running (or something like that). 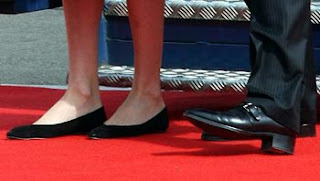 Then there is the possibility of a deal on nuclear energy, where the French build all our power stations and then we help pay for French engineers to sell similar power stations throughout the world.

All this is dressed up in glowing terms as, "a new Franco-British brotherhood," with Nick telling us that we ought to get together as "we have the same enemies throughout the world." Not quite right is that. He forgot to count the French.

Today, though, is the day of the gliz, parading the new trophy wife – in flat heels – and being nicey nicey to all and sundry. The real stitch-up starts tomorrow when the two leaders get down to business. It will then take some time for us to find out precisely how we have been shafted but that will emerge in the fullness of time.