The "miracle" of globalisation 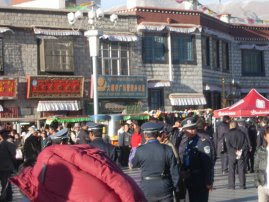 Multiple reports from newspapers and agencies tell of rioting and violence in the Tibetan capital of Lhasa, with clashes between security forces and rioters. Shooting in the streets has been reported, shops have been burned down and policemen have been attacked.

The unrest seems to centre on a group of monks from the Ramoche monastery in the centre of the capital Lhasa, who began a march through the streets, but there are reports of another group of protesters, led by students from Lhasa University, who staged a protest in Barkhor Square, in front of the Jokhang, the main temple in the heart of Lhasa.

Details can be read here, here and here, as well as from agency reports such as here.

Almost all the accounts refer in some way to the Olympic Games, with opponents of the regime exploiting the attention being drawn to China. But the thing to appreciate is that, almost without exception, the crop of reports we are reading are by-lined Beijing, some 2,500 miles away from the action. This is not dissimilar – in distance terms – from reporting a riot in downtown Gaza city from an office in London.

In truth, therefore, it is unlikely that any western reporter really knows what is going on – and anything they do know is likely to be heavily filtered by the Chinese authorities.

One thing that has not been mentioned by the Western media though, is the massive weather disaster that was reported earlier this month, news of which seems to have disappeared completely from agency reports.

With over four million people affected, a not unusual dynamic in such events is for those survivors who can to make their way to the capital for relief and succour, swelling local populations and, sometimes, adding to political friction.

We cannot say this is happening here, but we do wonder. Are we seeing one effect of the cold weather stress and, if so, what is happening in the rest of China? And what, if anything, is the broader impact of the reported strife on the general political situation in China?

There was, of course, a time when such events were of (relatively) academic interest. But, if China is suffering increasing food stress and needs to buy into the global market to keep its population quiescent, this will have a significant upwards effect on key commodity prices – which are already sky high.

Trouble in Tibet, therefore, could – by the "miracle" of globalisation - have a direct knock-on effect on the price of bread in Britain over the next season and much else besides. This is one to watch.